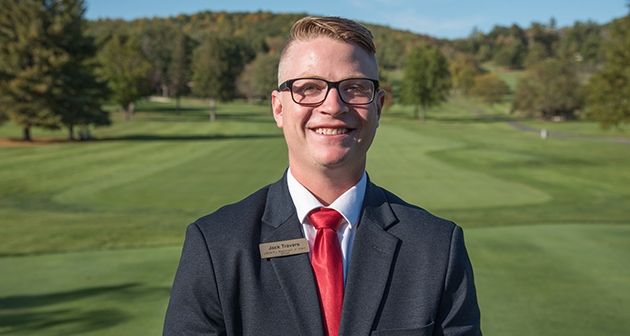 Travers in New Dual Role with BDGA and NYSGA

This position is dually overseen and funded by the NYSGA and Buffalo District Golf Association (BDGA). He will also take on the responsibilities and title of BDGA Executive Director.

We’re excited to have Jack working as the new Executive Director and thrilled to have him in this dual role, in conjunction with helping to build and strengthen our relationship with the NYSGA,” said Bob Rosen, President of the BDGA.

Travers will manage and oversee the Buffalo District Golf Association’s main initiatives, with a focus on administering their tournament and scholarship programs this season. Beyond his BDGA responsibilities, he will assist in conducting USGA and NYSGA qualifiers, championships and Amateur Series events that are held in the western region of the state.

“Jack has been an asset as an intern over the past two seasons and we are confident he will transition into this role prepared to do some great work for both organizations. Not only will he take the lead for our shared events in WNY, but he will play an important role in the 2020 Williamson Cup, held this August at the Country Club of Buffalo. We are looking forward to great things from Jack as we focus on strengthening golf in WNY” said Andrew Hickey, NYSGA Assistant Executive Director.

A two-year participant in the USGA P.J. Boatwright, Jr. program, he was the Syracuse District Golf Association intern in 2018, and took on a larger role in 2019 while interning for the BDGA. Prior to joining the NYSGA, he earned a Bachelor’s Degree in the Sport Management program at SUNY Cortland in the spring of 2018. Travers was raised in Niagara Falls, and played varsity golf, hockey and baseball at Niagara-Wheatfield.

“The game of golf has given me incredible experiences and opportunities. I am looking forward to giving others the same chances and continue growing the game in Western New York,” said Travers.