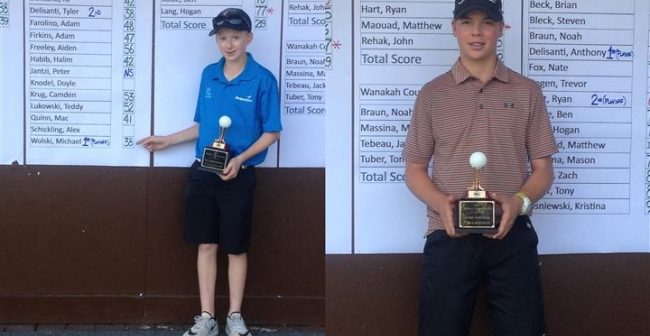 The Buffalo District Golf Association Interclub Championship was held at Park Country Club on Thursday, July 26.  Willowbrook Golf Club dominated the event. Willowbrook swept the team portion of the Championship.  In the Sub-junior Division (below left), Willowbrook's Noah Conti, Tyler Delisanti, RJ Delisanti and Andrew Vaeth posted a team score of 130 to take the title.  In the Junior Division, Anthony Delisanti, Nate Fox, Ben Kolbe and Hogan Lang (below right) posted a score of 219 to take the title.  Team totals were based on the low 3 of 4 scores.
Both divisions had playoffs for individual medalist honors.  In the Sub-Juniors, Michael Wolski (below left) of the First Tee of WNY defeated Tyler Delisanti on the first playoff hole as both players carded a 38.  In the Juniors, Ryan Hart of the Country Club of Buffalo, who just came off of a tie for 4th in the NYSGA Junior Championship, and Anthony Delisanti both shot a fantastic round of 68, 3 under par.  After both players went par, birdie on the first 2 playoff holes, Delisanti (below right) defeated Hart on the 3rd playoff hole when Hart's par put lipped out and Delisanti drained a 6 footer for the victory.
« Back to Listing
Play