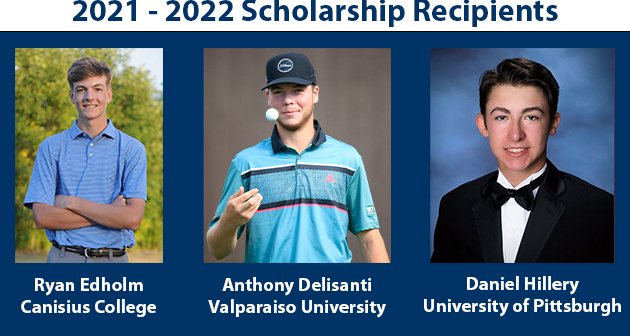 BUFFALO, N.Y. -- The Buffalo District Golf Association is proud to announce the students who will be receiving awards for the 2021-2022 academic year. Since 1976 the BDGA has awarded over $500,000 in scholarships to deserving male and female scholar athletes in Western New York. Each year the BDGA presents awards to students who have distinguished themselves through academic achievement as well as athletic involvement.

In addition to the BDGA Junior Golf Scholarship, the BDGA established the J. Fred Silver Memorial Scholarship in 2020. The scholarship is named for the champion golfer and founder of the Senior Porter Cup, who served the Buffalo District for many years. The recipient of this award will be a student who has distinguished themselves through athletic excellence, educational achievement and high moral character.

The first ever recipient of the J. Fred Silver Memorial Scholarship will be Anthony Delisanti. Delisanti will attend Valparaiso University in the fall, where he will major in Exercise Science while competing on the Men's Division I Golf Team. Anthony is also the reigning BDGA Player of the Year after capturing the 2020 BDGA Individual Championship and 2020 Match Play Championship.

The two recipients of the BDGA Junior Golf Scholarship include; Ryan Edholm and Daniel Hillery. Edholm will attend Canisius College with plans to pursue a Business degree.  Hillery plans to attend the University of Pittsburgh and will major in Biological Sciences with a minor in Chemistry.

The BDGA would once again like to congratulate these gentlemen for all of their achievements and wish them the best of luck with all of their future endeavors.

The 2021 BDGA John Rehak Scholarship Fundraiser will be held on Monday, October 4th at River Oaks Golf Club. If you are interested in making a donation to the BDGA Scholarship Fund or sponsoring the event, please contact BDGA Executive Director, Jack Travers (jtravers@nysga.org).