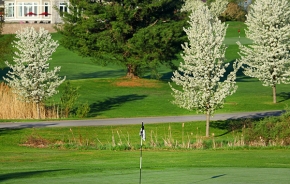 In the early 1960’s Robert Van Patten, Sr. had a vision.  His vision entailed not only first class affordable housing but also recreational facilities.  Accordingly with the building of the Clifton Knolls development he also built 2 swimming pools and a small executive 9 Hole Golf Course.  As he expanded to what is now Country Knolls North he purchased the Belott and Warner farms in the hamlet of Jonesville.  It was on these properties that he had Armand Farina, the then PGA Golf Professional on staff, design a 27 Hole championship golf course.  The course was completed and opened in 1968 and featured large spacious greens, slopping wide fairways, expansive views of the countryside, wildlife and mature trees that are indigenous to New York State.

In July on 2000 Robert Van Patten, Jr. purchased the facility from Country Club Acres, Inc. the parent company established by his father.  Course improvements began immediately with the installation of the computerized irrigation system.   In 2002 plans were drawn up to construct the long awaited Grand Clubhouse on the highest point of the property overlooking the golf course. In the spring of 2004 this beautiful facility, which was named “The Vista”, was completed and opened to the public. The building boasts breathtaking views of the surrounding Catskill, Adirondack, Green and Helderberg Mountains. The new facility has fulfilled the need of providing multiple dining options that has attracted larger tournaments that desired upscale dining together with their golfing experience.

In the summer of 2004 our new practice facility was completed when the Driving Range was constructed. The Range is full sized with natural grass tees. A spacious practice putting green completes the practice facility.

Continuous upgrades to the course itself are being made. Drainage work and new cart paths have been created.  New tee signs, ball washers, and benches were installed.   Plans are in the works for an informational score board to be built outside of the Pro Shop as well as a gazebo to be used for tournament registration.  Future plans call for a new pavilion and golf cart storage facility to be constructed.

Changes have been made but one thing that won’t change is the basic philosophy that Bob Sr. built his company on and that is “quality and value for less”.  It’s the cornerstone of Van Patten Golf Club and The Vista Restaurant!