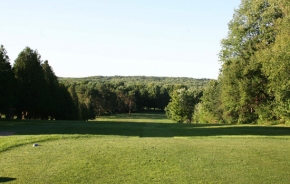 In 1941 the McConnell and the Charboneau farms were transformed into a nine hole golf course, a project jointly financed by the Frank S. Harden Co. (Harden Furniture) and the Camden Wire Co. (International Wire). The conception and the planning came from the vision of Harry Harden, Charles Harden and Clarence Harden. The Charboneau Farmhouse served as the original Club House for over 20 years and in September of 1964 a cornerstone was installed in the foundation of the present Club House, in Memory of Harry A. Harden.

Over the years the course has experienced many changes and continuous improvements. Since 1991, the entire membership contributes annually to an "Assessment" Fund focusing on Capital Improvements. Projects such as enlarged tees, new greens and critical course drainage have all been possible thanks to the support of the membership.