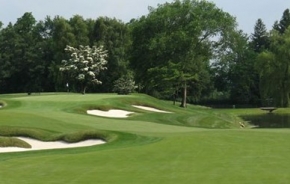 Century Country Club was started informally in March, 1898 and was incorporated on May 4th of that year. There are several theories as to how the name Century was chosen, including the possible intention to limit the membership to 100 and the establishment of the Club near the turn of the century.

The Club first occupied leased premises in the Throgs Neck section of New York City, on a tract of about 60 acres fronting Long Island Sound, where the members had a nine-hole golf course laid out.

In those days, the Clubhouse remained open all winter, and in 1917, "tea dances" were held on both Lincoln's and Washington's birthdays.

After World War I, some of the members became dissatisfied with the design and size of the golf course. A committee studied the cost of making improvements or of moving to a new location. Walter J. Travis, former British Amateur and three time U. S. Amateur Champion, was hired as a consultant. Upon his recommendation in 1922, the Club purchased 175 acres of the George W. Fairchild property on Anderson Hill Road in Purchase, NY, for $262,500 or $1,500 per acre. The Greenburgh site was sold to the Metropolis Country Club for $300,000.

The new golf course at Century was designed and constructed in 1926 by the famous British architects H. S. Colt and C. H. Alison. Colt and Alison were partners in a London firm which also included John Morrison. At its inception in 1920 Colt and Alison were joined by Alister Mackenzie, the famous architect responsible for Augusta National, Cypress Point, and Crystal Downs among others.

While there can be no doubt that the plans for Century were drawn in their office and that Colt contributed to the concept of the layout, Charles Hugh Alison is credited with the design of the course. Harry Colt made his last visit to North America in 1914, when he was retained by George Crump to provide the routing plan for Pine Valley. In 1920, when the layout of Pine Valley was still to be finalized after the death of Crump, Alison came to America to represent the Firm. While in the U.S., Alison laid out Burning Tree Club, Washington. D.C.; Sea Island G.C., Georgia; Kirtland C.C., Cleveland; and Milwaukee C.C.

The Club implemented a Golf Course Master Plan in 2005. The plan included a new short game area, drainage, total bunker renovation, fairway contouring, green surround replacement, resurfacing of all tees, new cart paths and construction of new tees. The new tees helped lenghten the course to 7005 yards from the blue tees. The plan was completed in 2012.

Ben Hogan joined Century as assistant to Dan Mackie in 1938. His "letter of recommendation", written by a Century member, stated that "he made a nice appearance." When Mackie left for neighboring Old Oaks Country Club in 1940, Hogan became the Head Pro and remained at Century for two years.

Century's Clubhouse was designed by members Joseph Friedlander and Harry Allen Jacobs, and was completed in early 1924. It featured a central courtyard, which became roofed over in the late 1960's, and now constitutes the living room. The former living room area is the present Club dining room.

Golf Digest and The Met Golfer regularly acknowledge Century as one of the top courses in New York State and the Metropolitan area, respectively. In 2013, Links Magazine ranked Century Country Cub as one of the "100 Most Prestigious Private Golf Clubs in the World".