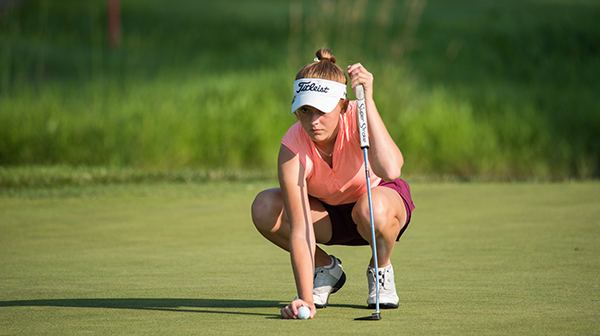 Zigrossi Leads After First Round of NYS Girls' Junior

Zigrossi, of Ridgemont Country Club, made the turn at two-over, and shot an even-par on the back. She noted the speed of Seven Oaks greens were hard to manage at points during her round.

“The course itself is so pure, but the greens are fast,” Zigrossi said. “ After playing it yesterday I was like ‘this could go one of two ways.’ This is a tough golf course, it can really beat you up.”

This is Zigrossi’s second appearance in the NYS Girls’ Junior, after finishing in the top ten in 2019 at age 13.

“In the last two years my game has improved quite a bit from the last time I played here (in 2019), but it’s also a lot easier for me to manage,” Zigrossi said. “I’m a much longer hitter than I was before so I can play a little more risky...I had a lot of wedges in. I think that helped me a lot today.”

Tee times for tomorrow's final round for the Girls’ Division begin at 12:30 pm.