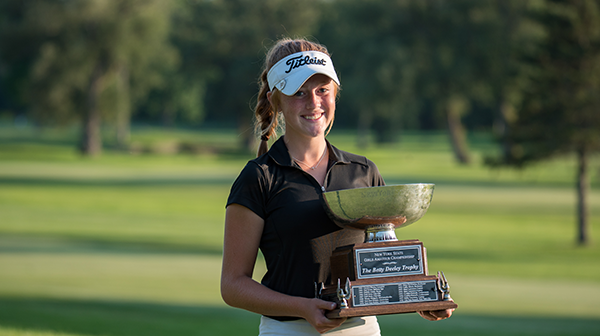 In her second time competing at the NYS Girls’ Junior, Zigrossi carded a three-over 147 (74-73) in her two days on the course.

“It’s totally unreal, Zigrossi said. “I was not expecting it at all. I obviously wanted to come in and play well and get it done but now that it’s over, it’s unreal.”

The Ridgemont Country Club member held a one-stroke lead into Wednesday’s final round, and opted to play more conservatively as opposed to her aggressive first-round approach.

“I hit my driver almost every single time yesterday and even today I just played smarter, not harder. I think I played the golf course more instead of trying to make shots,” Zigrossi said.

She opened up a three-stroke lead heading into the back nine, but was unaware of where she stood in the leaderboard until she approached the fairway on the 18th hole.

“I knew coming down the stretch risking it wouldn’t be the best idea,” Zigrossi said.

Birdies on holes 8 and 14 allowed Zigrossi to grow her lead. She noted that her putting was crucial in helping maintain consistent pars, and the driver was able to set up good approach shots.

“I didn’t have great putting numbers but I didn’t really have to work for my pars which was nice. Little tap-ins were a lot easier to make than four or five footers for par...Swing aggressive to conservative targets is how I played today.”

“Being runner-up it’s just a good motivation... and I’m going to be working really hard to get it next year,” Zhang said.

Her best stretch came in the middle portion of the golf course, where she birdied on 5, 7, 9 and 13 to stay within a few strokes of the lead.

“The hole looked pretty big,” Zhang said. “I was telling my dad on the phone that, if I kept the flagstick in, the hole looked so big to me and I just felt that I could make every single putt during that stretch.”

Zhang last played this tournament when she was 11-years-old. Since then, she’s improved significantly.

“I knew that coming into this tournament I had the chance because I had improved a lot but it just wasn’t my time, so I’ll get it next year,” Zhang said. “My driver was pretty straight, it wasn’t as far but it was pretty accurate so I didn't have to waste a shot on it. My putting really helped today because of how much I saved and how much I needed to make to add pressure.”