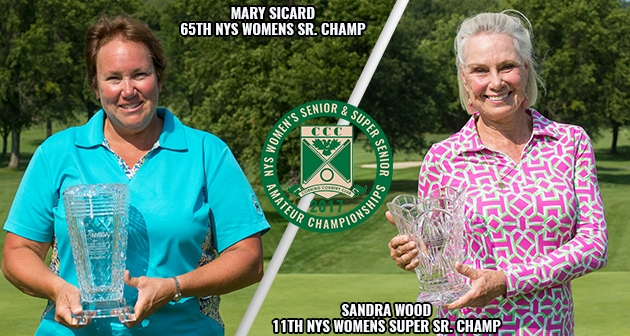 CORNING, N.Y.  – On a hot and humid August day at Corning Country Club, Mary Sicard shot an even-par 74 to edge the field by one stroke and capture her second consecutive NYS Women’s Senior Amateur Championship. Her two-round total score was a 5-over 153.

Mary Jo Kelly, birdied two out of the final three holes (#16 and #17), almost forcing a playoff, although neither of them knew where they lied on the leaderboard until the final scores came in.

“I didn’t realize until the last group came in and we were standing at the scoreboard. I was so thankful there wasn’t a playoff,” said Sicard with a chuckle.

Kelly, of Wolferts Roost Country Club, finished one stroke behind Sicard after a final-round 75, and ended with a 154 (+6) to earn runner-up honors in her first NYS Women's Senior appearance. An Albany-native, who’s taken a lengthy hiatus from competitive golf until recently, won the NYS Women's Amateur at Foxfire Golf Course in 1980 and was runner-up in 1999 at Kingswood Golf Course.

“I had kids and wasn’t traveling,” said Kelly, who put her competitive amateur golf career on hold to raise a family and support her two children in their own athletic endeavors.

Her first taste of high-level competition in decades came in 2015, when she qualified for the U.S. Senior Women's Amateur at her home club, Wolferts Roost Country Club.

This year, she played in the NYS Women’s Mid-Amateur at Schuyler Meadows Club and finished tied for ninth, which ultimately inspired her to make the trip to Corning.

“I’m finding my swing again. I’m thrilled (finishing as runner-up), but it makes me think of what it could have been,” she said, referring to the two double-bogeys and triple-bogey she picked up throughout the 36-hole championship.

Sicard and Kelly were both tied for second with six other formidable competitiors after the opening round of play, but finished with the two low tournament scores on a tough ex-LPGA venue to claim the top two spots.

Sicard, had a score in mind for the final round and eclipsed her number on the 5,536-yard, par-74 layout. “I aimed for par the whole day,” she said.

Her first six holes consisted of two birdies, two bogeys, two more birdies – and what she defined as the “spark of her round” came on the seventh hole, a 100-yard par-3. “It never should have gone in, but it did,” referring to a 25-footer she knocked down to save par. “Hit and hope. That was really what kept things going.”

“Unbelievable. I never in my wildest dreams expected it. It almost feels better than the first time,” she exclaimed. “To defend, it was really special.”

Sandra Wood shot her age, 77, on the final round to win her fourth title since the tournament was inaugurated in 2007.

Wood, of Cornell University Golf Course, edged another past champion, Michelle Marquis, by two strokes to win the title with a two-round total of 156 (+10).

“Today, I hit beautiful iron shots. More fairways, more greens than yesterday. I only had a couple up-and-downs,” she explained.

Another past champion, Sharyn Costello of Cornell University Golf Course, came in fourth at 163 (+17) and won the gross category for the 70-74 age group.

Marquis, of Pompey Club, played in the final pairing with Wood and yesterday’s leader Robin Mead. At the turn, she held a two-stroke lead over Wood, but faltered with five bogeys on the backside on Nos. 10, 11, 13, 14 and 15.

“The competition is always good for both divisions. Sandy played very well today. I missed a few drives that got me into trouble. I think that was probably the difference,” she said about the round.

Marquis won the championship at Kanon Valley Country Club in 2014, as well as the Senior in 2000 at the Country Club of Rochester. The player out of Syracuse looks forward to this event every year. “It doesn’t get much better than playing with friends, at a good course, year after year. That’s what it’s all about.”

Wood, who lives in Ithaca with her husband Dan, a former PGA professional, feels more comfortable with him on the bag. “When he’s with me, he calms me down and keeps me headed in the right direction. At my age, I get jumpy and jittery and you never know what I’m going to do. He’s very helpful.”

She now extends her record for most Super Senior wins to four, two more than any other champion. Her other titles came from 2009-2011 at Thendara GC, Brookwoods CC and Clifton Springs CC, respectively.

The duo both believed the turning point of her day came on the par-3 seventh, which she birdied, just after a double on the hole prior. “The flag was at the bottom of the green. I was on the very back and snaked it all the way down for a two. If it didn’t go in, it would have zoomed by it down the hill,” she revealed.

The couple unofficially dubbed the shot “the miracle on mount Corning,” a creative hyperbole, to say the least.

“To win this at the age of 77, it doesn’t get much better than this,” Wood said with a sizeable smirk.

Age groups winners were awarded prizes for both low gross and low net in the following categories: