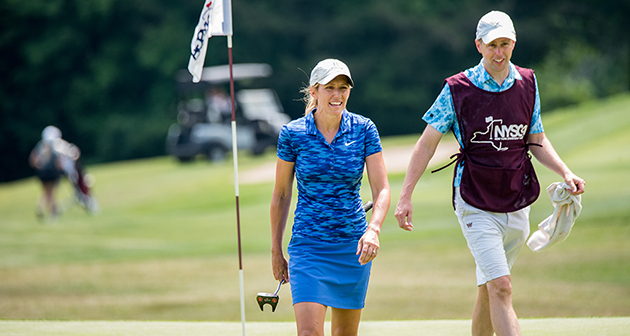 Speedgolf scores are calculated based on their total shots and how much time it takes the player to run the course. Cupp’s record-breaking performance came in the first round of the tournament, where she carded a one-under 72 performance on a course that she ran in 50 minutes and 48 seconds, giving her an overall score of 122:48.

The previous record was set by New Zealand’s Liz McKinnon at 126:41. With Cupp’s second round performance of 125:08, she captured the Women’s Division championship, while her husband, Wes, won the Open Division title.

“I’m super pumped,” Lauren told Rome Daily Sentinel after her round. “I’ve been chasing that world record for a few years now. In fact, I’ve got it plastered all over my house so, I know exactly what it was.”

Cupp is currently ranked as top-ranked women’s speed golfer in the world, having claimed titles at the U.S. and World Speedgolf championships in 2018, and another at the 2019 Japan Speedgolf Open. As an amateur golfer, she won the 2017 Women’s Mid-Amateur at Schuyler Meadows Club and the 2019 Women’s Four-Ball championship with partner Pennie Carlo.

Over the summer, she placed second in the 2021 NYS Women’s Mid-Amateur that was also held at Teugega (where she set the record), forcing a playoff with the eventual champion, Christy Schultz.