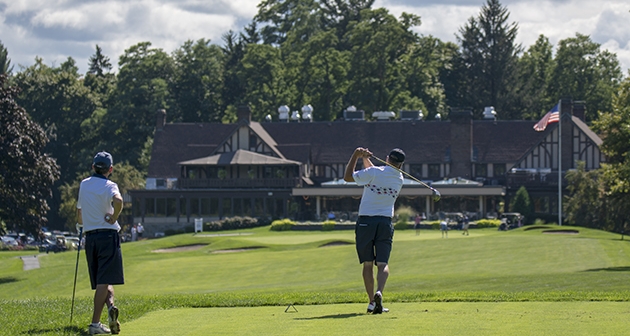 Related: Round 1 Results I Round 2 Pairings I Photo Galleries

David Wailes of NYSGA eClub – Central NY came in at 72, and Wade Sarkis of Canandaigua Country Club as well as Brian Brown of Southward Ho Country Club finished at 73.

Due to the inclement weather that moved into the area on Monday night through Tuesday morning, the tournament committee decided to change the opening round format from morning and afternoon threesomes off #1 and #10, to a 1:00pm shotgun, repaired in foursomes to avoid the weather, and prepare the course to ensure the field could get the round in.

It proved to be the right decision as the skies cleared throughout the afternoon and into evening as the 132-player field navigated the course.

Co-leading Cooper, who lives only a few miles down the road, has a strong familiarity with the golf course and was pleasantly surprised with how it held up against the weather.

“Ten feet below the hole was the ideal shot today, and that was what I was trying to do. I hit a lot of good irons, ten to twelve feet, just couldn’t get them in the hole.” He mentioned of his round. “I’ve been playing pretty good this year…I’m hoping to do the same thing for two more days.”

Hughes, who came down from Watertown, felt the slower green speeds (due to the weather) helped to instill confidence in his putting. “I got up and down a couple of times early and made a few five-foot putts that gave me confidence. The speed really took the bite out of the undulations, if you were above the hole there wasn’t that fear factor that there would normally be.”

“I missed it in the right spots and got up and down so as long as I continue to do that, I’ll be alright,” he mentioned of the 36 holes left in this week’s championship.

In the 23rd NYS Super Senior Amateur, for players ages 65 & older who elect to compete in the division, Jim Hamburger’s 1-over 72 was enough to capture an early lead.

The older division played the course at a shorter yardage of 6,068 yards.

Hamburger, who plays out of McCann Golf Course in Dutchess County, began his round with a bogey on the par-4 eighth, but slowly built up momentum throughout the afternoon en route to his leading score.

“I didn’t start well, but then steadied the ship and played better as I went along. I got used to the green speeds, which helped. I think the biggest thing was that I hit my driver straight, and was in play almost all the time, which made the course a lot more playable.”

When asked of his thoughts on today’s round and leading after the opener, he mentioned, “For all the rain that we’ve had I thought the course was in really good shape. I’m looking forward to tomorrow and quite frankly I’m just happy we were able to play today.”

Both fields will be repaired back into threesomes tomorrow with morning and afternoon tee times off #1 and #10 beginning at 8:00am.

After tomorrow’s round, the two divisions will be cut to the low 50% of the field and ties for the final 18 holes of the tournament to be conducted on Thursday morning.