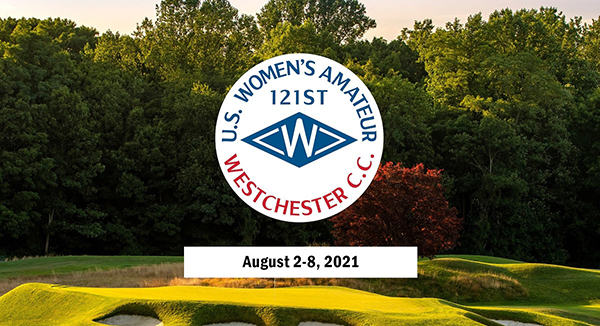 Trio of New Yorkers in the Field for 121st U.S. Women's Am

(Update August 4) - One of three New Yorkers in the field made the cut at the 121st U.S. Women's Amateur at Westchester Country Club.

RYE, N.Y. - Ina Kim-Schaad of Rhinebeck, Lauren Peter of Carmel and Linda Wang of Plainview will represent the Empire State in the 121st U.S. Women’s Amateur at Westchester Country Club on August 2-8.

The U.S. Women’s Amateur is a seven-day tournament of both stroke and match play. The first two days consist of two rounds of stroke play to determine seeding for match play. The field is cut to 64 players after stroke play, then switches over to match play for the final five days. The championship match on the final day consists of 36 holes. Westchester Country Club is set up at 6,423 yards with a par of 72.

Kim-Schaad earned an exemption into this year’s tournament for winning the 2019 U.S. Mid-Amateur at Forest Highlands Golf Club. She posted a 3-and-2 victory over fellow New Yorker, Talia Campbell. Kim-Schaad, who was runner-up at the 2000 U.S. Junior took a brief hiatus from golf to focus on her career before returning in 2016 to win the title in just her eighth USGA championship.

She is listed as one of the oldest competitors (38) in the field for the 2021 U.S. Women’s Amateur. She competed in the 2020 U.S. Women’s Open at the Champions Golf Club, where she missed the cut.

Peter earned the last spot at a Scarsdale sectional qualifying event in a 4-for-1 playoff. She birdied on the first hole, putting her head-to-head with Linda Wang for the final qualifying spot. Peter sunk a par to punch her ticket to the 121st U.S. Women’s Amateur. Wang then was called up as an alternate.

A rising senior of the Ohio State women’s golf team, Peter has qualified for the US Girls’ Junior and US Women’s Four-Ball in the past. She tallied 12 top ten finishes in American Junior Golf Association events. She finished in the top 15 in this year’s Women’s Porter Cup, and most recently earned fourth place at the Donna Andrews Invitational.

Wang is a recent St. John's University graduate, where she played on the women's golf team from 2016-20. During her senior season, she captured the Boston College Intercollegiate title. She also won the PGA Works Collegiate Championship in 2019. She qualified for the U.S. Women's Amateur in 2019 as well, where she missed the cut. She's a past winner of the Women's Metropolitan Golf Association's Junior Girls' Open.

Listed below are tee times in Eastern Time for the trio’s opening rounds of the U.S.Women’s Amateur: