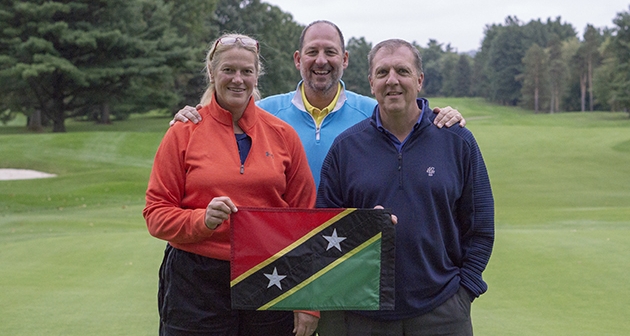 The top-104 were invited to the championship, and after a few weather-induced withdrawals 95 players from around the state competed in a shotgun format on a rainy morning in Rochester.

The championship was the culmination of a season-long race points race, where thousands of amateur players from New York State competed in handicapped tournaments for prizes in both gross and net, acquiring points (based on their net finishes) throughout with hopes of qualifying for the championship. Point totals were calculated based on the sum of each individual player’s top-5 tournament finishes in 2018.

New this season, in accordance with the new exciting partnership that was presented in 2018, St. Kitts Tourism Authority added some new exciting features to both the series and the championship.

During the championship, a St. Kitts closest to the pin hole was established, with a representative from the islands giving away prizes, rum tastings, and incorporating mini games into the promotion.

At the post-tournament banquet and awards ceremony, in addition to handing out gift certificates and winner trophies, two lucky players won an all-expense paid trip to the 2019 St. Kitts and Nevis Admirals Cup Am-Am Tournament on February 2 – 7, 2019.

The winners were selected through a drawing pool, with all the players who qualified for the end-of-the-year championship.

Kimberly Baker of Olde Kinderhook Golf Club, and Jeffrey Diekvoss of SGATour.com were the lucky winners and were presented with an all-inclusive trip down to the islands including airfare, lodging, tournament entry, meals, etc.

The NYSGA will be bringing a group down to the islands led by Assistant Executive Director Andrew Hickey and encourages members to consider joining us to play in this exciting event down on the island in February.

Through the partnership, St. Kitts is offering any NYSGA member who wishes to travel down to St. Kitts and take advantage on one of their travel packages an exclusive member discount.

For more information on opportunities to travel down to St. Kitts and Nevis, click here.

Championship winners for gross and net were established within each division, as well as flight, to decide the 2018 Amateur Series Individual champions. Listed below are the winners broken down by division, flight and net/gross.

Congratulations to all our Amateur Series winners and thanks to everyone who participated and supported the events this season. Special thanks to St. Kitts Tourism Authority and The Golf Connection LLC for their support of the NYSGA. Stay tuned for the 2019 schedule, set to be released in early 2019!