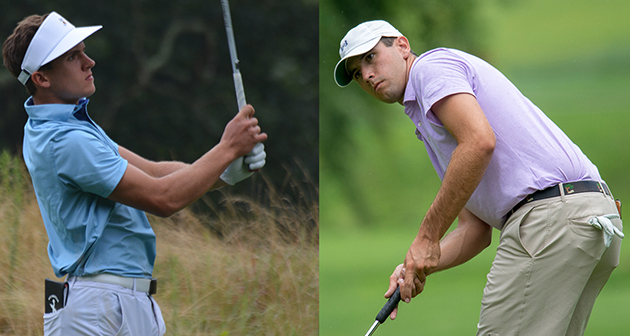 The New York duo's result in the Finals awards them conditional status for the 2022 season. Those who finished in the top 40 were awarded guaranteed entry into at least the first eight events of next season.

By advancing to the Finals, the duo is guaranteed at least conditional status on the Korn Ferry Tour in 2022. Results from the Finals will determine which players earn guaranteed starts, and how they’re ordered on field lists early next season.

Card, 27, posted 10-under 274 at the Plantation Preserve Golf Course in Florida to finish T17 and a stroke ahead of the qualifying number. This is his first time competing at Q-School. He's played college golf at High Point University.

Nicholas, 24, posted 7-under 281 at Robert Trent Jones Highlands/Marshwood to finish T15 and qualify on the number. He needed to convert his birdie on the final hole to advance into the final stage. He was recently a member of the Korn Ferry Tour in 2020-21. He succesfully qualified for the Korn Ferry Tour Q-School Finals in 2019, where he finished T61 (-9) at Orange County National in Winter Garden, Florida.

Four players from New York State were unable to make it through their second stage qualifying sites including Trevor Sluman of Rochester (who now resides in Florida), Peter Creighton of Buffalo, Timothy Hegarty of Briarcliff Manor, and Andrew Svoboda of New Rochelle (spends winter in Palm Beach Gardens, Florida). Creighton and Sluman each had conditional status during 2020-21 season.

Dan McCarthy and Kevin Roy, both from Syracuse, will retain their status on the Korn Ferry Tour next year after each finishing in the top 75 of the 2020-21 regular season points standings.

Brandon Wu and Cameron Young, who both played on the Korn Ferry Tour in 2020-21, earned 2022 PGA Tour cards from their finish in the top 25 last year.