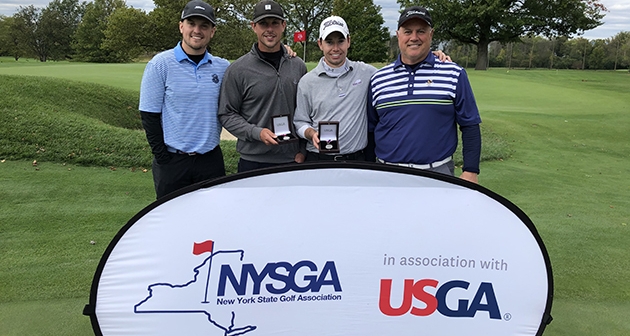 41 sides competed for two qualifying positions and two alternate positions into next year’s championship at Philadelphia Cricket Club, May 23-27, 2020.

The qualifier was originally scheduled for Thursday morning but rain saturated the course, forcing the committee to postpone until Friday morning. Fourteen teams withdrew from the qualifier after the postponement.

Holley’s Brandon Grzywacz and partner Alec Kunzwiler of Oswego, along with Brad Monroe of Syracuse and Kevin Vandenberg of Pulaski, qualified for the championship.

Both sides collaborated for scores of 5-under 67 to advance on the Willie Watson design and shared medalist honors.

Canada’s Mark Baines and Scott Teskey shot 4-under 68 to secure the First Alternate. Another Canadian team, Josh Hunke and Ryan Kings secured the Second Alternate position in a three-way playoff at 69 over Ryan Glazier of Rush and Michael Rodgers of Batavia, as well as Luke Saunders and Louis-Philippe Seguin of Canada.