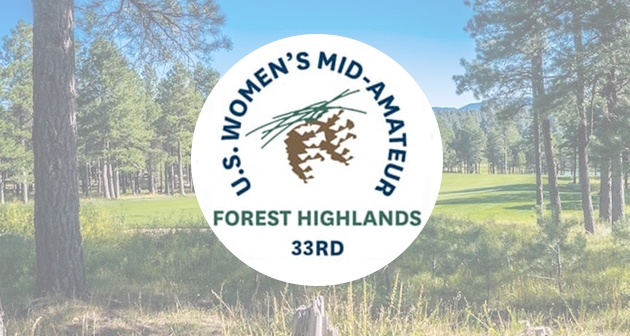 The Deepdale Golf Club member took an early 1 up lead with a par on the opening hole and mantained it throughout the entire match.

This is Kim-Schaad's first USGA victory. She came close in 2000, when she was the U.S. Girls' Junior Amateur runner-up.

FLAGSTAFF, ARIZ. (UPDATE 9/19) -- The 2019 U.S. Women's Mid-Amateur Final will include two players from New York City, Ina Kim-Schaad and Talia Campbell (originally from Texas) after they both knocked off former champions in the semifinal matches.

Kim-Schaad continued her streak of impressive match play with a 4 and 2 win over four-time champion Meghan Stasi of Fort Lauderdale, Fla.

Campbell took down 2015 champion Lauren Greenlief of Ashburn, Va., 1 up with a par on the 18th hole.

The two Empire Staters will face off at 9am MDT to decide the winner of the Mildred Prunaret Trophy.

FLAGSTAFF, ARIZ. (UPDATE 9/18) -- Half of this year's U.S. Women's Mid-Amateur semifinalists are from New York, Ina Kim-Schaad and Talia Campbell.

Both players continued their match-play dominance durng their semifinal matches, with Kim-Schaad defeating Michelle Butler of Columbia, Mo., 4 and 3, and Campbell defeating Megan Buck of Easton, Ma., 3 and 2.

Kim-Schaad will play against four-time champion Meghan Stasi of Fort Lauderdale, Fla. in the semis, while Campbell will take on 2015 champion Lauren Greenlief of Ashburn, Va.

FLAGSTAFF, ARIZ. (UPDATE 9/18) --  New York's Ina Kim-Schaad and Talia Campbell both conquered their Round of 32 and 16 matches to advance into the quarterfinals at the U.S. Women's Mid-Amateur.

Kim-Schaad defeated Katrina Camitoc of San Francisco, California during the Round of 32 by a margin of 6 and 5. She then faced defending champion Shannon Johnson of Easton, Mass. during the afternoon at Forest Highlands and won 5 and 4.

Campbell faced Kay Daniel of Covington, La. in the in the Round of 32, whom she defeated 4 and 3. She then matched up against Gretchen Johnson of Portland, Oregon, and won the match 3 and 2.

Kim-Schaad will face Michelle Butler of Colombia, Mo. in the quarterfinals while Campbell will face Megan Buck of Easton, Mass.

FLAGSTAFF, ARIZ. (UPDATE 9/17) -- The duo from New York continued their success at the 33rd U.S. Women's Mid-Amateur at Forest Highlands, both winning their opening round matches.

Ina Kim-Schaad defeated Jessica Smith of Grand Junction, Colorado, 4 and 3, in the Round of 64. She will play Katrina Camitoc of San Francisco, California in the Round of 32.

Talia Campbell outlasted Marissa Mar of Palo Alto, California in 19 holes. She will face Kay Danile of Covington, La. in the Round of 32.

Ina Kim-Schaad shot 73-72 for 1-over 145 over the two stroke play rounds at Forest Highlands. She finished T-10 and was seeded 11th. She will face Jessica Smith of Grand Junction, Colorado in the Round of 64.

The duo includes Talia Campbell and Ina Kim-Schaad, both out of New York City.

The U.S. Women’s Mid-Amateur has 132 women in the field. They will compete over 36 holes of stroke play, after which a cut of the low 64 scorers will be applied. Those who make the cut will advance to the first of six rounds of match play before a champion is declared on Thursday.

The par-72 Forest Highlands Golf Club layout will be setup at 6,393 yards.

Campbell, qualified at Knickerbocker Country Club in Tenafly, New Jersey and was the qualifying medalist with a 75.

Kim-Schaad, earned an exemption into the championship through the top 25 age-eligible points leader in the Women’s World Amateur Golf Ranking. She was a member of New York’s final team competing in the USGA Women’s State Team Championship during the final tournament in 2017.

Listed below are tee times for Round 1 on Saturday and Round 2 on Sunday (all times MST):