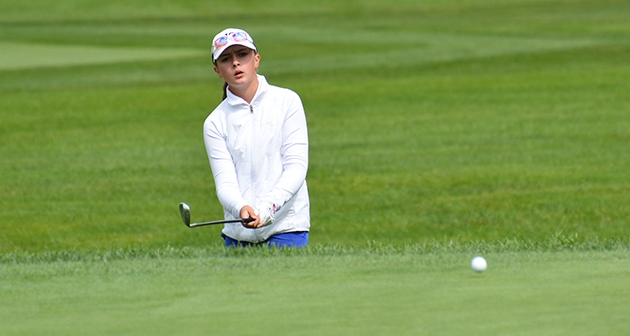 HAMILTON, N.Y. -- Twelve-year-old Bailey Shoemaker carded an impressive 1-under 71 to lead the field by two strokes after the opening round of the 55th NYS Junior Girls’ Amateur at Seven Oaks Golf Club at Colgate University.

Joining Shoemaker in the final pairing is Melanie Green of Shelridge Country Club, who registered a 1-over 73 and stands alone in second. Also in the group will be Emma Shen of Rockland Country Club, who finished with a 75 (+3).

Faith Franciosco, an NYSGA eClub member, submitted a 4-over 76 and is currently in fourth.

Last year’s runner-up, Taylor Miano out of Dobbs Ferry, is tied for fifth with Madison Braman at 5-over (77).

Shoemaker, who doesn’t play out of Seven Oaks Golf Club but is “pretty close to it”, started the day firing on all cylinders with birdies on three of the first four holes, Nos. 2, 3 and 4.

“The first three (holes) I was just trying to get out 1-over or better,” referring to the challenging opening stretch of the course. “I did a lot better than I imagined I’d do.”

This is Shoemakers third year competing in the Championship. In 2015 at Cedar Lake Club, she finished in ninth place and won the 13 & under age group. Last year, at Seven Oaks, she finished tied for third at 7-over 151 (78-73), winning the 13 & under again. This year, she hopes to win a much larger trophy. “My goal is to do better than last year…to win.”

Green, who’s had plenty of tournament success in 2017, feels her recent change in approach to major amateur championships has really served her well. “I’ve been out of it mentally in the past I guess. I realized I need to just go out and play golf,” she mentioned. “You can’t win on the first day of a tournament but you can sure as heck lose it. I tried to stay calm today and just go out and play.”

Trailing behind the young talent, Shoemaker, Green doesn’t feel her approach will change in tomorrow’s final round. “If I’m playing with the leader, I’ll focus on what she’s doing on the last couple of holes, to see where I stand. Other than that, I’m just going to play the course.”

Shoemaker, who spends a lot of time at the host club, feels like she could have registered a much better number today after plenty of preparation on the beautiful layout over the past few months. “I was hoping I could shoot a 66 today. I felt like that round had a lot of potential.” It all boiled down to “silly mistakes” - referring to her two bogeys on the back at #11 and #13. “Those bogeys were unnecessary and I definitely could have picked up a couple of birdies,” she expressed.

Tomorrow the Girls’ Junior Division will begin on #1 in the morning wave, with the first groups set to tee off at 7:30am.