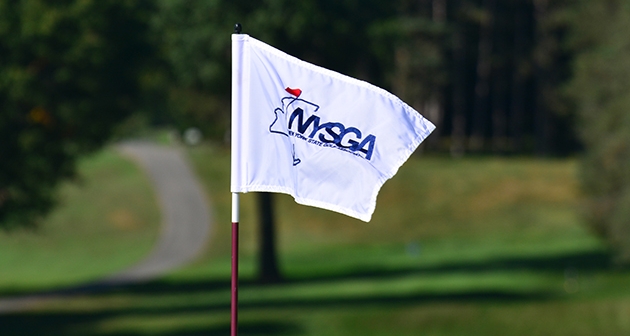 (Updated June 23) - Due to recent guidelines published by the NYS Department of Health on sports and recreation, the NYSGA has postponed the following upcoming 2020 golf championships indefinitely:

This decision was made from new restrictions detailed in the Interim Guidance for Sports and Recreation During the COVID-19 Public Health Emergency, published by the NYS Department of Health on Thursday, June 18.

In the document, Golf was defined as a “lower-risk” sport, and the following information was provided on page 5. “Effective immediately and in accordance with this guidance, the abovementioned permitted statewide outdoor, low-risk recreational activities, as determined by ESD, may partake in all types of play, except competitive tournaments requiring travel.”

The NYSGA asked for further clarification from the CNY Region’s Empire State Development office on the travel restriction. On Monday, June 22, association staff received a reply from the Deputy Director stating, “Competitive events regarding travel means events outside of the region. A tournament in Central New York could not have people traveling from outside Central New York to participate.”

At this time, no other changes have been made to the remainder of the championship schedule, which includes the NYS Boys’ (18U) Junior Amateur at Seven Oaks Golf Club (July 20-21), the NYS Men’s Amateur at Onondaga Golf & Country Club (July 27-28), or the NYS Men’s Mid-Amateur at The Seawane Club (Oct. 2-4) later this season. The NYSGA is optimistic that the travel restriction will be lifted and statewide championships will be held this season.

NYSGA staff will continue to closely monitor all information and updates regarding COVID-19 and its impact on competitive golf in New York State, and provide timely updates as the situation in New York State continues to progress.

The NYSGA’s flagship event, the NYS Men’s Amateur at Onondaga Golf & Country Club in Fayetteville, N.Y., has been rescheduled to July 27-28. The format has been changed from 72 to 54 holes of stroke play, over the two days with a cut after 18 holes to the low 40 players and ties.

The NYS Girls’ (18U) Junior Amateur, normally played concurrently with the boys, has been moved to the Tuscarora Golf Club in Marcellus, N.Y. on July 6-7. This change will reduce the overall field size for both championships to better apply required social distancing guidelines.

“This demonstrates the NYSGA’s resolve to make any change we feel will reduce the risk of spreading the Coronavirus at an NYSGA competition,” said Andrew Hickey, Assistant Executive Director. “We are trying to do everything possible to minimize this risk. These championships attract players from all corners of the state, and we must prepare for future restrictions even as the outlook improves.”

As previously announced, all 2020 championships will adopt the following policies: no sectional qualifying, no scheduled practice rounds, caddies are prohibited, and the one spectator policy is in effect. Players will also be required to submit hole-by-hole scores via a mobile scoring application.

Registration has reopened for all championships and eligible players may submit their entries.

Detailed information regarding entry selection and exemptions for the Men’s Amateur, Mid-Amateur and Boys’ Junior (18U) will be released at a later date.

These changes, approved by the NYSGA Executive Committee, were determined to minimize the potential for spread while providing the best championship experience possible amid the current pandemic.

Schedule and format details have been confirmed for the upcoming NYS Women’s Amateur & Mid-Amateur, which will be conducted June 29 – 30 at Teugega Country Club in Rome, N.Y.

This year’s tournament will be conducted over two days instead of the traditional three days of stroke play competition. Participants in the Women’s Amateur are set to play 36 holes on June 29, after which a cut will be applied. The remaining players will move into the final round on June 30. The Mid-Amateur (for players 25 and older) field will play 36 holes, with 18 holes each day and no cut. Single-rider carts will be made available to all players.

Registration for these championships has reopened and the entry deadline has been extended until Monday, June 22 at 5pm.

Details for the remaining championships are being finalized and will be released later this month.

(Update on May 13) - The following NYSGA Amateur Series events scheduled for June 1st have been postponed.

There have been no changes to NYSGA events scheduled after June 1st. No events have been canceled at this time.

(Published April 28) - Due to current restrictions under the NYS on Pause Executive Order and the evolving situation regarding COVID-19, the New York State Golf Association (NYSGA) has postponed all tournaments scheduled in May of 2020.

The NYSGA will continue working to develop best practices to ensure that when permitted to do so, we can conduct tournaments while continuing to prioritize the health and safety of our members.

Postponed Events: The NYSGA has postponed all events scheduled to be played in May:

Future Events: There have been no changes to NYSGA events scheduled on and after June 1st. We will notify players of future events of any changes immediately if such a decision is made.

Please feel free to contact the NYSGA with any questions. We will do our best to respond in a timely manner given our current work restrictions. Thank you for your support of the NYSGA. We all hope to see you on the course soon.