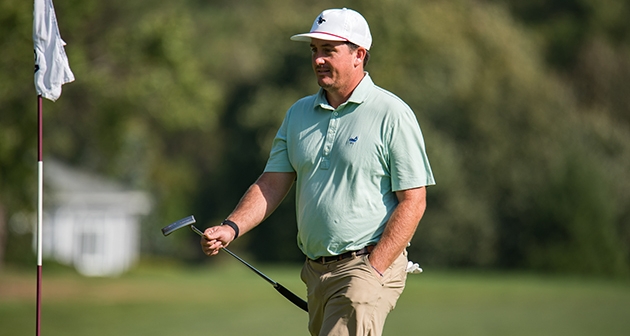 The player out of Sleepy Hollow Country Club, shot a fiery 5-under 66 during the second round under blue skies and firm conditions on the 6,314-yard layout.

“It was one of those days where I was playing well and it was easy to take it one shot at a time. I kept it below the holes, made a few really nice putts and hit it really well all day.”

His strategy worked out, as he penciled in eleven pars, six birdies and only one bogey. He now sits at 135 (-7). “My game plan was to try to keep it in play, pick spots where I could hit the fairway with an iron and give myself a look at the green. They’re small and firm enough where if you’re coming out of the rough it’s hard to hold them.”

The 27-year-old from Brook-Lea Country Club converted eight birdies, including five consecutive from Nos. 3-7. “It’s a putting contest out there. With the shorter course, a lot of people have opportunities. You just need to putt better than everyone else.”

Tied at third are two local-area players, Kevin Vandenberg of the host club and David May of nearby Highland Park Golf Club.

Vandenberg will join Linehan and Tilley in Sunday’s final pairing.

“It’s always nice to play better at your home course. It was a good round today. I just tried to keep things in play and keep the ball in front of me,” said the 53-year-old who’s won several area events over recent years and qualified for this year’s Senior Open. “Yesterday, I didn’t putt well. I missed seven putts between 4-6 feet which I normally don’t do. This morning I went back to my other putter.”

May, now 32, won two consecutive NYS Boys’ Junior Ams in 2002 and 2003, the later at Tuscarora. This week was the perfect opportunity for the ex-pro to come back and compete again on the Syracuse venue. “When I saw that it was going to be here, twenty minutes down the road and have the chance to be back at home each night with the family, I thought it was perfect. It’s great to be able to compete again and see all the guys I grew up playing with. It’s been fun.”

At even-par 142 sits first-round co-leader Jim Gifford of the Capital District eClub and Danny Edwards of the Central NY eClub.

Brett Cooper from The Seawane Club (where the tournament will be held in 2020) posted even-par 71 today and is eight shots back at 1-over.

Adam Condello, who made the cut on the number yesterday, rebounded with a 69 to ensure another competitive round for him on Sunday. The 2017 Men’s Amateur champion has been playing through a wrist injury this season with surgery scheduled for the fall.

Tilley’s lead in his debut is substantial enough where other contenders will need to try to go low over the final 18 holes to catch him.

“I’ve had some nice results over the past few years in USGA and other regional events. To make my debut, and play this well through two rounds, I’m very proud of myself and hope I can keep it up tomorrow,” said the 36-year-old Tilley, who regained his amateur status in 2016 after turning pro for eight years after college.

“It would be great to duplicate this round,” said Linehan. “There’s a couple things I need to work on, but I just need to keep it going, stay aggressive and hopefully make a lot of birdies.”

“I have a couple of different clubs I might hit off some tees that I think I’ve figured out after two days. Holes where I’ve gotten into trouble. I’ll go out and have fun, that’s the plan,” said May.

Vandenberg commented, “I can’t control what others are doing so I’ll try to go out and do the same thing. Make some smart choices, try to use my length where I can, but be careful about it.”