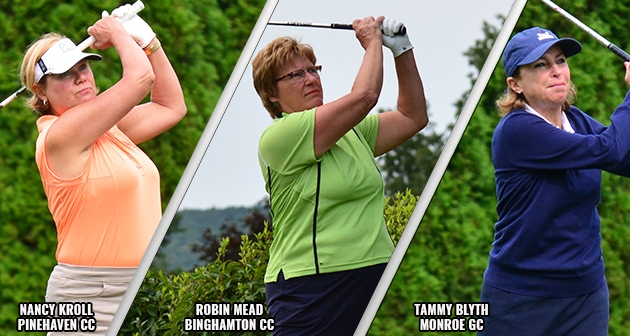 CORNING, N.Y. – After the opening round of action of the 65th New York State Women’s Senior Amateur Championship at Corning Country Club, two players are tied atop the leaderboard at 3-over 77.

Another state champion, Mary Jo Kelly, of Wolferts Roost Country Club, as well as Penny Zonneville of the home club, join cluster of players tied for second. Both Kelly and Zonnevile are making their NYS Women’s Senior debut this week.

Kroll, of Pinehaven Country Club, made the turn at an even 37. She dropped three birdies to offset her three bogeys, but slipped a little on the tougher backside on her way in. “I did par the last hole, so I was pleased with that,” she said about her finish after doubling #17.

Kroll was paired with Sicard, Kaul and Kahler (all finished at 79) and felt the high level of play within their group helped push competition through the course. “We all played so well,” she said about the foursome. “We’re friends, it was a great group to play with. Plus, we’re all easy going and the level of play was so high.”

When asked about being tied for the lead heading into tomorrow’s final eighteen, she remarked, “It’s just confidence – standing over the ball and believing in yourself to make a good swing. That’s all I’m going to try and do tomorrow.”

Blyth, who was the runner-up in 2015 at Thendara and tied for third last year at Whiteface Club & Resort, feels good about her chances. “I’ve played a lot (this season), I’ve enjoyed playing. When I come to the Seniors, it’s a shorter course than what I play at home,” referring to her home club, Monroe Golf Club. The shorter distance makes the greens more accesible in two for Blyth, giving her additional scoring opportunities.

Blyth’s toughest stretch of the course came on the three-consecutive par-5’s, Nos. 12, 13 and 14, where she made three straight bogeys, but bounced back quickly with a 20-footer for birdie on the 120-yard par-3 15th.

When asked about the crowd of past champs on her tail, she answered, “They’re all tough competition, but I’m glad to be in the mix…so we’ll see.”

Kelly, who won the NYS Women’s Amateur title in 1980 at Foxfire Golf Course, was four-under through five, but couldn’t seem to find her line today. “I didn’t really putt well at all. My short game really let me down here today,” she confessed.

The Albany-native was striking the ball well all day, but made a few deteriorating three putts in route to her 5-over 79. On the home hole, the par-4 18th, she made a triple-bogey. “It’s the worst it could have been.”

In the 11th New York State Women’s Super Senior Amateur Championship, Robin Mead shot the low score on the course, a 76, to lead the division by two strokes.

The Super Senior Division, for ladies 65 and older, played at par-73 and at a shorter yardage than the Senior, at 5,208 yards.

Alone in second at 78 (+5) is 2014 champion, Michelle Marquis, who won at Kanon Valley Country Club and claimed a Women’s Senior title in 2000 at Country Club of Rochester.

Mead, of nearby Binghamton Country Club, found something special in her swing today. “I was fortunate enough to keep the ball in play, which for me, is really good,” she said referring to her tee shots.

In the thick, unforgiving rough around the course, staying in the fairway is essential to hitting greens in two, and Mead did just that. “It makes up for a lot of bad shots. I haven’t been playing that well all year, my handicap’s higher than it’s been in a while. Today was just a lot of fun,” she stated.

Marquis, of Pompey Club, had a rough start to the day with a four-putt for triple-bogey on her opening hole, #10, and made a bogey on the next to start 4-over through two.

“It was nerves, just nerves. I’m glad I got it together,” she said with a look of relief.

Things turned around on the twelfth hole, her third, when she mentally decided to take the pressure off herself. “After that start, I was saying to myself - it doesn’t matter…just hit the ball and putt.”

Although her start wasn’t ideal, she certainly finished her round on a high note with a chip-in for birdie on her final hole (#9).

“I haven’t played in any big competitions in a couple of years,” she said, due to a back surgery in 2015 that prevented her from playing in last year’s competition. “I’m very happy with how things turned out.”

Tee times tomorrow will be from 8:00am – 10:10am, with groups starting from both #1 and #10. The leader groups for both divisions, will be the last to tee off #1 with the Super Seniors in the penultimate pairing and the Seniors in the final group.