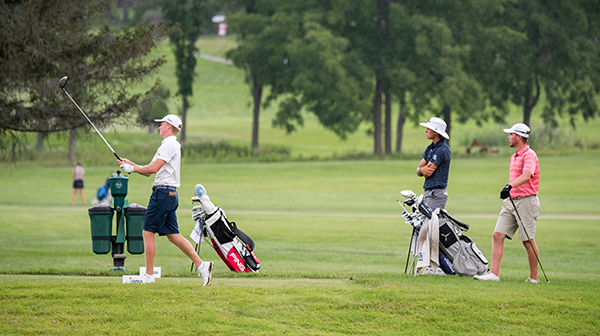 Related: Round 1 Results / Photos / Round 2 Pairings

The trio leads the field by one stroke heading into the final round on Wednesday. Play was suspended nearly halfway into the round due to inclement weather. After an hour of waiting as storms rolled through the area, the field was able to resume play.

Lyons, a member of Schuyler Meadows Club, had a slow start on the tough opening stretch at Seven Oaks, but responded with four birdies (three on the backside) to finish his round on a strong note.

“Very tough start,” Lyons said after shooting three-over through two holes. “I was like ‘alright those holes are behind me’ then I started getting really hungry for birdies. I stayed really patient.”

As the round progressed, more putts started falling. He saved par on hole 14, a par-three where his first shot went beyond the green to the right. He added momentum with his fourth birdie on 17, then finished with a par on 18.

“When I sunk the par putt on 18, I had never been more satisfied with a round of golf,” Lyons said. “I was really trusting my game.”

Colella, of Bellevue Country Club, produced four birdies in his round as well.

“I think my putting was really good today,” Colella said. “From hole 8 to 11 I kind of put it out of position, missing the greens. I hit some good chips and made some good putts which kind of saved me the round so I had some good birdie putts today.”

Colella also said his short iron play was crucial, given the speed of the greens.

“I hit the green in the correct spot (with my irons) to let the roll out do the work because the greens were really firm out there even with the rain,” Colella said.

Delisanti, of Willowbrook Golf Club, shared the sentiment that the greens were faster than past NYS Junior Am’s he’s played at Seven Oaks.

“It’s tricky out there, the greens are definitely really firm, but they’re in great shape,” Delisanti said. “It’s tough, there’s no spin. You’ve got to bounce pretty much everything up so it’s tricky to get everything close like you want to.”

Delisanti’s scorecard was consistent, suffering only one bogey and converting two birdies. Having played the NYS Junior for several years, he’s become wellaccustomed to the course.

“Age helps out here for sure. When you play it a couple times, you kind of figure it out,” Delisanti said. (The course) is pretty much the same, just the firmness makes it so much tougher.”

Jack Berl of NYSGA eClub - Rochester, Seth Conway of Corning Country Club, Ryan Edholm of Pendleton Creek Golf Club and Gabe Williams of the host club Seven Oaks shot a 74 to put themselves within three strokes of the lead.

In the opening round of the 64th New York State Boys’ Sub-Junior Amateur Championship, Cole Jones of East Aurora Country Club and Jacob Olearczyk of NYSGA eClub - Central NY each carded a one-over 73 to lead the field.

Jones converted four birdies, three coming on the back nine, en route to his one-over finish.

“Some of the par-four’s were gettable, and they helped me out a lot. The driver was pretty good, so just being close and having wedges into par-four’s was good.”

Two of Jones’ birdies came on par-four’s, the other two being par-five’s. He was at two-under heading into his final hole.

“I had a lot of momentum going through 17,” Jones said. “Had some issues on 18 though. Hopefully I can just keep the foot on the gas and keep going tomorrow.”

Jones gave credit to his driver for setting up his approach shots, but felt shaky at times around the green.

“I was just swinging hard and the ball was going where I wanted to go. I struggled a little bit on the greens but other than that, (the round) was solid.”

Olearczyk posted three birdies, and converted an eagle on No. 18 to close out his round. He sat at two-over heading into the back nine, and finished three-under in his final three holes to shoot up to the top of the leaderboard.

Jackson Saroney of Drumlins Golf Club is one stroke behind the leader, holding sole possession of third place after shooting two-over 74.

Kieran Cummins of Wolferts Roost Country Club and Jason Starkweather of Ridgemont Country Club each carded a three-over 75, trailing by two strokes heading into the final round.