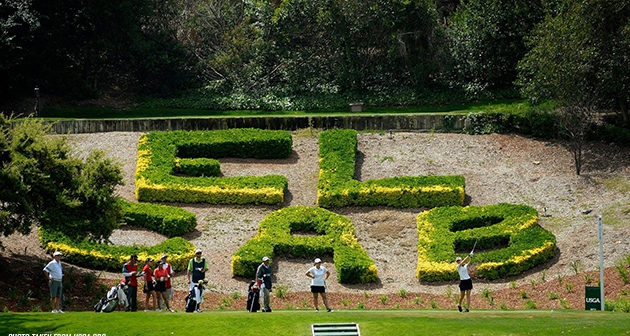 UPDATED (May 1, 2018) -- c Back-to-back bogeys on the thirteenth and fourteenth par 4's at El Caballero Country Club invetiably cost the side of Lindsay May and Lauren Peter during their round of 32 match in the 4th U.S. Women's Amateur Four-Ball. The lone New York team in the championship eventually lost the match a few holes later when their California opponents, Leila Dizon and Irene Kim, birdied the 450-yard par 5 17th to win, 2-up.

UPDATED (April 30, 2018) -- Lindsay May and Lauren Peter advanced into the match play round of 32 during a 3-for-2 playoff held late Sunday afternoon at El Caballero Country Club. Peter secured the 31st  seed for the team after holing out on a 29-foot chip on the first playoff hole, while the other two groups matched par and continued. They finished stroke play qualifying at even-par 144 (72-72) and will face 2nd seeded Leila Dizon and Irene Kim Monday, April 30 at 10:06am PT (1:06pm ET).

Bailey Shoemaker and her partner Megha Ganne, missed the cut by four strokes with a two-round score of 148 (+4). Both players competed in the Drive, Chip and Putt National Finals earlier this month, with Shoemaker finishing second in her age group (12-13) and Ganne finishing fourth in girls 14-15 age group (her third appearance).

Both pairs advanced through sectional qualifying at Knollwood Country Club in Elmsford, NY. May/Peter were qualifying medalists with a 68, and Ganne/Shoemaker finishing two strokes behind at 70, and secured their spot over 1st  alternates Tara Fleming and Noelle Maertz of New Jersey.

The course will be setup at 6,330 yards and will play to a par or 72 at the premier Robert Trent Jones Sr. design. To follow live scoring throughout the championship, head over to the USGA’s US Women’s Amateur Four-Ball homepage.