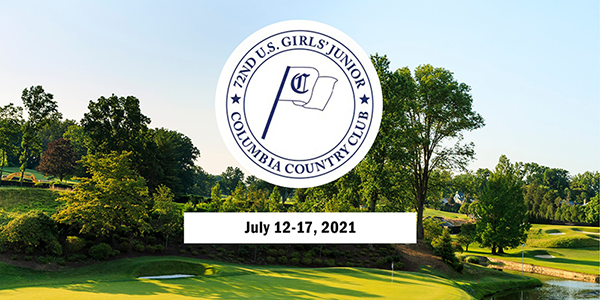 (Update July 16) - Bailey Shoemaker fell 4 and 3 to New Jersey's Katie Li during her qurterfinal match. She was down two after two holes, and was unable to get the match back to square throughout the rest of the morning.

(Update July 15) - Bailey Shoemaker won 4 and 3 over Avery Zweig of Texas during the Round of 16. She closed the match winning four of the final six holes to become a 2021 quarterfinalist.

Earlier in the day, she defeated Borina Sutikto of California, 5 and 4, in the Round of 32.

In the Round of 32, Alice Hodge lost to Paula Miranda of Mexico. Although she aced the par-3 8th hole from 183 yards to highlight her final day at the championship.

Kennedy Swedick fell to Katie Li of New Jersey, 4 and 2.

(Update July 14) - The trio from New York all won their Round of 64 matches at the U.S. Girls' Junior Amateur.

Bailey Shoemaker won 4 and 3 over Canada's Erin Lee, and was in control throughout the match. She will face Borina Sutikto of California during the Round of 32.

Kennedy Swedick surged late to win 2 up over Lacey Uchida of Hawaii, after being 2 down through 13 holes of the match. The Albany junior won four out of the final five holes. She will face Katie Li of New Jersey during the Round of 32.

Alice Hodge won 3 and 1 over Laney Frye of Kentucky, winning the final two holes to close the match. She will face Paula Miranda of Mexico during the Round of 32.

Bailey Shoemaker finished T15 at 4-over 144 during the stroke play rounds. After opening with a 75, she fired a 1-under 69 during the second round, which included four birdies. As the 18th seed, she will face Erin Lee of Canada in the Round of 64.

Kennedy Swedick finished closed behind at 5-over 145 to finish T21, and also posted 1-under 69 during her second round. As the 26th seed, she will face Lacey Uchida of Hawaii in the Round of 64.

CHEVY CHASE, MD - Alice Hodge of Larchmont, Bailey Shoemaker of West Edmeston, and Kennedy Swedick of Albany will be representing the Empire State at the 72nd US Girls’ Junior Championship at Columbia Country Club on July 12-17.

A starting field of 156 players will compete in the U.S. Girls’ Junior over 36 holes of stroke play. After that, the field will be cut to the top 64 players for match play. Five 18-hole rounds of match play will determine the finalists who will square off in a 36-hole championship match.

Hodge shot two-under 70 to earn medalist honors at a sectional qualifier at her home club, Bonnie Briar Country Club in Larchmont on June 23. A rising sophomore at Florida State University, she competed in all eight events in her first collegiate season for the Seminoles, helping lead her team to a ninth place finish at the NCAA Championship Finals and runner-up at the ACC Championship.

In the fall of 2020, she won a Golf Coaches Association of America Amateur Series event and earned a top-10 finish at the Florida State Match Up in February. She also finished fourth at the 2020 LJT Texas Girls’ Invitational.

Shoemaker, winner of the past three NYS Girls’ Junior championships, was the leading medalist at a sectional qualifier at Elgin Country Club in Illinois on June 3. She is currently ranked No. 7 in the American Junior Golf Association rankings.

Of the 10 events she’s participated in this season, she’s collected seven top-10 finishes, including victories at the Kathy Whitworth Invitational (which earned her an exemption into the LPGA’s Volunteers of America Classic) and the Sung Hyun Park Junior Championship. She finished eighth in the 2019 AJGA Girls Championship, and posted a top-5 finish at the 2020 Florida Women’s Open.

In January, she finished as runner-up at the South Atlantic Women's Amateur Championship at 15-years-old, right after wrapping up a T5 finish at the Women’s Orlando International Amateur.

Swedick was the qualifying medalist at the NYSGA-conducted sectional qualifier held at Yahnundasis Golf Club on June 14. She shot two-over 74, leading a 16-player field to advance to her first ever US Girls’ Junior.

A rising sophomore at Albany Academy, Swedick has already collected an abundance of recognition within New York State. In 2019, she won the New York State Section 2 Girls’ golf title as an eighth grader.

Listed below are tee times in Eastern Time for the trio’s opening rounds in the U.S. Girls’ Junior: