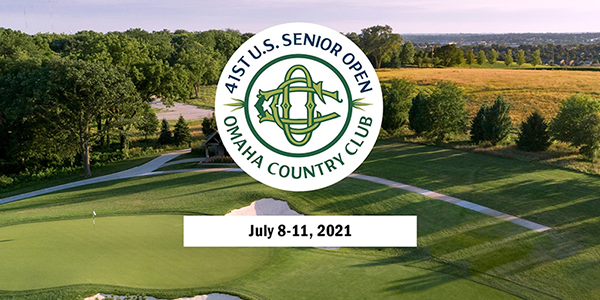 (Update July 12) - Joey Sindelar and Jeff Sluman each made the cut at the 41st U.S. Senior Open Championship at Omaha Country Club, while Bob Royak and Mike Laudien were unable to advance.

Sluman and Sindelar both finished the tournament T46 with a 12-over 292 performance.

The U.S. Senior Open is a 72-hole, stroke-play competition. A field of 156 players will play two rounds on Thursday and Friday, after which the field will be reduced to the low 60 scores and ties. The remaining players will play two more rounds on Saturday and Sunday to determine a winner. If there is a tie upon the completion of 72 holes, a two-hole aggregate playoff will immediately follow. If this playoff results in a tie, the tied players will immediately continue to play off hole-by-hole until the winner is determined.

Sindelar, a class of 2019 NYSGA Hall of Fame inductee, will compete in this year’s U.S. Senior Open after finishing as a qualifying medalist at Indiana Country Club in Pennsylvania on June 9.

The 63-year-old has been on the Champions Tour since 2008, earning over 30 top-10 finishes. This year, Sindelar earned a top-25 finish at the Dominion Energy Charity Classic in October 2020. He has made the cut for all but one tournament he’s competed in this season.

As a member of the PGA Tour, Sindelar collected seven victories, with two coming in New York State at the 1985 and 1987 B.C. Open. He won the 1988 Honda Classic and most recently the Wachovia Championship in 2004, where he won in a playoff.

Royak won the 2019 U.S. Senior Amateur, therefore earning an exemption to this year’s US Senior Open.

He defeated Roger Newsom, 1 up, in the final at Old Chatham Golf Club. Royak has competed in two U.S. Senior Opens, including 2012 and 2019. Currently residing in Georgia, he was named the 2017 Georgia State Golf Association Senior Player of the Year.

Sluman earned exempt status after landing within the top 40 of the Champions Tour all-time money list. He won the 1978 NYS Men's Amateur at Moon Brook Country Club. He's collected six victories on the PGA Tour, including the 1988 PGA Championship, the Greater Milwaukee Open twice (1998, 2002) and the 2001 B.C. Open.

While on the Champions Tour, Sluman has also racked up six victories, including the 2008 Bank of America Championship, 2011 Nature Valley First Tee Open. In 2019, Sluman became the 21st player to make 1,000 starts combined on the PGA TOUR and PGA TOUR Champions. He finished as runner-up in the 1992 US Open, and will be making his 13th consecutive US Senior Open apperance, tying him for third most among the field and most consecutive apperances.

Laudien qualified after garnering medalist honors at a Leewood Golf Club sectional qualifier in Eastchester. It will be his first appearance at the U.S. Senior Open.

Laudien has been a part of the Metropolitan PGA for over 25 years, having amassed 21 top-ten finishes in the section. He won the Met PGA Team Championship in October 2020, and is currently the head golf professional at Rotella Memorial Golf Club.

Listed below are tee times in Eastern Time for both each player's opening rounds at the U.S. Senior Open: