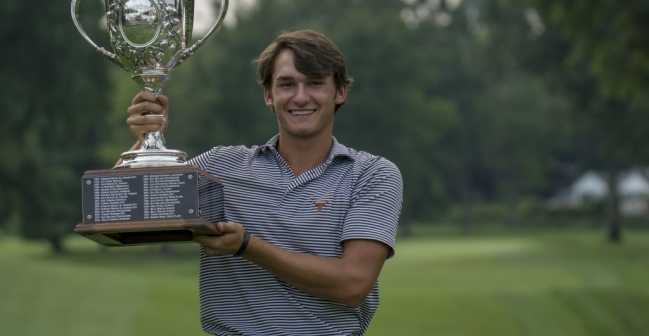 PITTSFORD, N.Y. -- With a birdie on the 72nd hole, Will Thomson claimed the 96th New York State Men’s Amateur Championship by a stroke at Irondequoit Country Club.

Thomson fired a tournament-low 67 in the fourth and final round on Thursday afternoon, and finished at 7-under 281.

Finishing in second was Chris Blyth of Mendon Golf Club, who pieced together a 69 in the afternoon and ended up at 282.

Daniel Griffiths of Binghamton Country Club finished in third place at 286. He strung together three consecutive even-par 72s together to start, and closed with a 2-under 70.

Jack Casler of Garden City Country Club had a four-round total of 290 and came in fourth.

Defending champion, Adam Condello of Locust Hill, was the only player in the field under-par through the first three rounds, but closed with an unexpected 81 to finish in eighth at 292.

17-year-old Thomson, walked up the eighteenth fairway knowing he needed a birdie to win. From 204 yards, he crushed a 7-iron uphill and placed his shot twelve feet short of the flagstick, leaving an easy two putt for the venerable title.

“I was close last year, had a battle with Adam (Condello) coming down to it. It feels really good to be close to home and come out on this golf course, play really well on my last eighteen, especially my last nine,” said Thomson of winning locally in Rochester. “It’s my first win in a while and it feels really good to have all the hard work pay off.”

He’s now the third youngest winner of the championship, just months behind 1965 winner Nick Raasch and 2009 winner Yaroslav Merkulov, both age 17 when they won the Ganson Depew Cup.

In the penultimate group, Blyth was 5-under through 71 holes, and knew he was one stroke behind Thomson. He gave himself a long chance for eagle on the home hole, but was unable to convert it to try to force a playoff.

“I knew I needed to eagle it to go one ahead and just tried to lag it up there and make the birdie, then see how it played out,” said Blyth of his final two strokes of the tournament.

The 25-year-old Rochesterian, won the District Amateur a couple weeks ago at nearby Monroe Golf Club, and brought that momentum into this week’s performance. “Winning that and then shooting 6-under par here. I couldn’t be happier. It’s hard to be disappointed with the way I played and the way it ended.”

Thomson, who now has three New York State Amateur titles under his belt (won the Sub-Junior back-to-back years in 2013-14), didn’t feel like he had his best stuff this week, but finally turned it on during the final round.

He credited the momentum swing to his chip-in eagle from just off the green on the iconic seventh hole at Irondequoit. “I think that kind of kick started me. The putter still didn’t feel that great, but then I made a really clutch six-footer for par on eight. Then a solid four-foot putt on nine for birdie. Then it started. I finally saw a few go in and got hot.”

Right around that time was when Condello began to get into a funk that he was unable to retreat from. He doubled the tough eighth hole, and then proceeded to tack on five bogeys and a double on the back to shoot an 81, a rare occurrence for Condello.

“The final round definitely doesn’t reflect the way I normally play, but that’s golf. An old bad habit crept in and I just couldn’t stop it. Every shot after that went left.”

Regardless of his final round performance, Condello played the best in the field through three rounds with 71-70-70, and entered the final eighteen at 5-under. “Once it starts to build and I’m out of it. It’s so tough to mentally get back into it. After that I just tried to stay out of Will’s way.”

Condello felt fortunate to witness Thomson secure the victory this year. Coincidentally, he was paired with him another time that Will had another major accomplishment. “I was with him when he was the youngest player to qualify for the U.S. Amateur,” when he did so at Mendon Golf Club in 2014. Thomson was age 13 at the time.

“He is mature beyond his years, not only as a person, but as a golfer too. It’s nice that it (the Ganson Depew Cup) is staying here, and Will was so close last year, he deserves it.”

Griffiths was surging up the leaderboard and was in the mix at 4-under with seven holes left to play, but couldn’t continue his scoring on the tougher backside of the course. Last year, he finished in the top-15 and had a goal of improving his performance this year, before heading to Binghamton in the fall to play for the Bearcats. “I was just trying to improve and build off that. It was definitely a success this year.”

Thomson will be back to defend, when the championship takes place at Buffalo’s Crag Burn Golf Club next year. “Yeah I’ll be there. I’m excited for that. I’ve never played it, but heard it’s special.”

In the meantime, he has a few more tournaments this summer, including the Junior Players at TPC Sawgrass and the American Junior Golf Association’s Ping Invitational in October. Shortly after, he’ll head to Texas University and join the men’s golf team this winter.