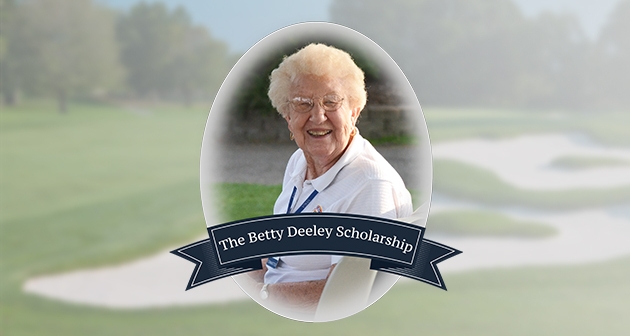 JAMESVILLE, NY -- The NYSGA is pleased to announce the creation of an endowed scholarship to honor the late Betty Deeley, an NYSGA legend and ardent supporter of women's golf. The scholarship will be awarded annually to a female high school senior from New York pursuing a college education, who has a clear passion for the game of golf and a financial need.

Betty Deeley joined the NYSGA as a volunteer in 1973 and quickly established herself as a vital member of the association. She was invited in 1974 to join the NYSGA executive committee, where she served proudly for 30 years as an influential advocate for women's golf. That same year, Betty accepted the offer to chair the NYS Girls' Junior Amateur, a role she cherished for an astonishing 42 consecutive years. In addition to the Girls' Junior, Betty would also chair the Women's Amateur (1980-2015) and numerous Women's Senior Amateur Championships. But her heart belonged to her junior girls'.

To Betty, volunteering with the NYSGA was never work. She reveled in the opportunity to support competitive golf for women and the young players who became "her girls". Working with these girls and her fellow volunteers at the NYSGA was one of the greatest joys of her life, which she fondly recounted in her 2012 induction into the NYSGA Hall of Fame.

"Mrs. Deeley was the matriarch of the NYSGA," recounts Andrew Hickey, NYSGA Assistant Executive Director. "For seven years, I had the honor to work with Betty at every NYSGA championship. It was amazing to see how many lives Betty touched, and the love she had for her players and their love for her. We could think of no better way to honor Betty's devotion to the game than to establish an enduring scholarship in her honor, benefiting the girls she worked so hard to support."

The NYSGA has begun a fundraising campaign with a goal to reach $100,000, which will be used to create an endowment fund to ensure Betty's legacy at the NYSGA lives on. To assist in the fundraising efforts, the NYSGA executive committee has committed to match the first $30,000 in donations. All donations are tax deductible, with 100% of proceeds going to this fund.