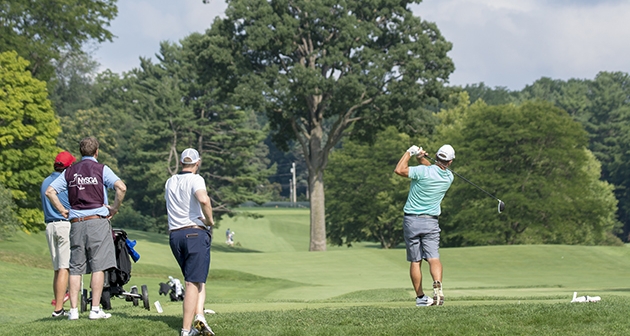 Three players are leading the tightly-packed leaderboard at 2-under 70 including Gray Barnes of Centennial Golf Club, Christian Chapman of Ravenwood Golf Club, and Jay Card of Gardiners Bay Country Club.

Barnes was the opening round leader at last year’s championship by carding 5-under 66. He eventually finished T-15, after shooting in the high 70s in each of the next three rounds.

“I haven’t really put too many low rounds together,” he mentioned. Although recently, he strung his best two consecutive tournament rounds at Redding Country Club in Connecticut for a U.S. Amateur Qualifier, where he earned medalist honors shooting 70-65 and finished at 7-under.

He believes he gained some insights from last year's experience and will hopefully translate it throughout the rest of the week. “Hopefully I keep it going. Having the lead in a tournament like this you learn so much, how you feel, the shots you hit, what your misses look like. Coming down the stretch today I took something from that experience and closed the round out really solid.”

Alongside Barnes is 2016 New York State Junior Amateur Champion, Chapman. “I know mentally I need to stay with it. I can’t jump ahead of myself. There’s just so much golf left to be played.”

The 19-year-old is coming off his freshman year playing golf for the University of Delaware Blue Hens, and has made a steady transition to tournaments that naturally are more of a mentally challenging than those on the junior stage. “Irondequoit is truly a championship course. It has everything – hazards, trees, long rough, fast greens, soft greens. It was an absolute grind.”

Card, who made a long trip from Long Island late last night, hadn’t seen the course prior to the beginning of today’s round, and played conservative golf en route to his under-par round.

“I drove it well which helps. I kept myself in play and tried to play to the center of the greens. I just made a few putts,” referring to his five birdies and three bogeys.

Tomorrow, his strategy won’t necessarily change, but seeing the course today opened his eyes to a few areas he’d like to avoid. “There’s definitely a couple spots I’ll try not to miss it there again. There are some short-sided areas that will get you into trouble in a hurry.”

Defending champion Condello, came out firing with an ace on the second hole, an uphill chimney-style par 3. From 178 yards, he took out a 6 iron and hit a perfect cut into the green.

The group saw the ball take one hop and disappear and looked at each other wondering whether it had fallen in. A few seconds later, an NYSGA Rules Official assigned behind the elevated green threw his hands up in celebration.

Condello asked around, “Does that mean it’s in?” Sure enough, it was.

He capitalized on that momentum with birdies on three of the next five holes and turned at 4-under. On the back, he started to slip a little to bring him back towards par.

“I was playing really good on the front. Then, as golf tends to do, slipped away a little bit. I started hitting some loose shots, put the ball on the wrong side of the green on a few holes, and ended up three putting.”

Unlike last year when he won in Long Island, the Rochestarian can sleep in his own bed this week as he attempts to defend his title. Plus, he just so happens to love the host course, which is another nice perk this year. “The greens are great, fairways are perfect. The back nine is probably one of my favorite sets of nine holes that I’ve ever played.”

59-year-old Kircher, the oldest player in the field who earned a special exemption, grinded out his under-par round with a 32 on the way in.

Tomorrow, players will remain in the same pairings with tee times flipped between the morning and afternoon waves. Additionally, any groups who began on the first hole will begin on the tenth tomorrow and vice versa.

A lot could change over the next three rounds of stroke play on the tricky and demanding Donald Ross gem. Live hole-by-hole scoring for the entire field will be available throughout the entire championship for anyone wishing to follow along with the action.

After tomorrow’s second round, a 36-hole cut will be applied, and the low 40 players and ties, as well as anyone within ten strokes of the leader will remain in the field for the final two rounds on Thursday. The field will be repaired based on scores for the final 36 holes, with pairings remaining the same through the finish.