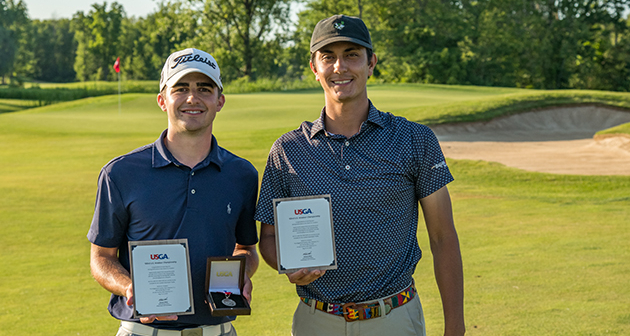 Bove shot the low round of the day at Timber Banks Golf Club with his first-round 63 on the par-72 6,944-yard course. He recorded 10 birdies and his only blemish came in the form of a bogey on #6 (Bove started round one on #10).

A 71 in the afternoon was more than enough to hang on to his medalist position, putting him at 10-under 134 on the day. He finished two strokes ahead of Andres Acevedo, who secured the second qualifier position at eight-under 136.

Acevedo, of San Antonio, Texas, surged in the second round with six birdies in his last eleven holes and pulled ahead of Conner Willett.

Rochester's Colin McGaugh made par on the first playoff (#18) to slide into the second alternate slot.

Bove and Acevedo both earned a spot at the 122nd U.S. Men’s Amateur which will be held at The Ridgewood Country Club in Paramus, N.J. from August 15-21.