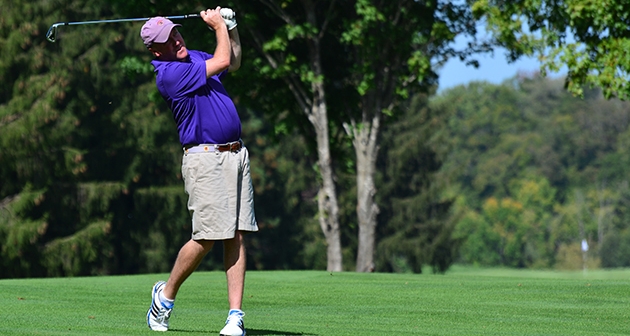 Tim Spitz fired the only score in red numbers during the opening round of the 34th New York State Men’s Mid-Amateur Championship at Yahnundasis Golf Club to separate himself from a cluttered leaderboard headed into the weekend.

Spitz, who claimed a Mid-Amateur title in 2012 at Midvale Country Club in Rochester, read the tricky, undulating greens very well today and was almost automatic with his putter.

After a three-putt for bogey on the short, 364-yard par 4 1st, Spitz birdied three out of the next five holes to make the turn at 2-under.

“I had probably one of the best putting rounds in years. I didn’t hit it all that great but anything inside of ten feet either went in or came very close,” said Spitz about his score.

Hobika, who grew up playing Yahnundasis and won his first Mid-Amateur title when the event was last held here in 1998, had a strong start and turned at even par, but slipped on a few holes down the stretch with three consecutive bogeys. “I had a bad drive on twelve, a bad iron on thirteen and a bad putt on fourteen. I ran the whole gamut.”

Last year’s champion, Jim Scorse, carded a 75 during his opening round.

Scorse, went 72-69-69 last year at his home club, Stafford, to edge the field by a stroke and win his second title in four years (the first at Onondaga). He’ll need some of the same medicine this weekend to propel himself back into contention over the next thirty-six holes of competition.

“I figure now I’ll probably have to go three or four under tomorrow to get back close to even par,” he said about his chances of defending.

He was 1-under through eight, but a few errors through the finish cost him. “I made some mental mistakes that I’ll need to clean up for tomorrow. I’m just going to try and play smarter.”

Spitz, who sits in the driver seat, has held this position quite a few times in recent years. In 2015, he fired a 3-under 67 in the opening round to snatch a one stroke lead over the field, held it through the second round of action, but eventually finished as runner-up to Luke Hobika at Wolferts Roost. In 2013, while attempting to repeat his title, the player from Monroe Golf Club finished tied for the lead at Onondaga Golf and Country Club before falling on the first hole of a sudden-death playoff in which Scorse eventually won.

It’s a good test. You really need to think your way around it,” Spitz said about the course this week. “Hopefully I can keep it up tomorrow,” he mentioned about his putting.

The field has been cut to the low 60 and ties and fell at 79, with 74 competitors advancing into the championship’s second round.

Tomorrow, all players will tee off #1 in threesomes at nine minute intervals beginning at 8am.