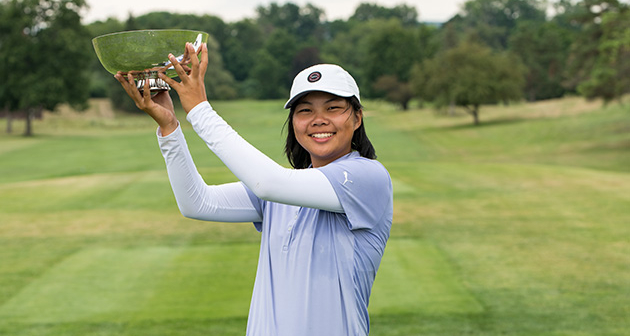 Fresh off a U.S. Girls’ Junior appearance in Kentucky a few days prior, she steadily marched her way to victory around the state park layout and posted even-par 71 in both rounds.

The 15-year-old who played well during her first appearance in 2021, felt confident she could give the Betty Deely Cup a run this summer.

“Last year I came in third so I was definitely gunning for the win this time,” said Li. “It’s a bit unreal, it’s still sinking in.”

She teed off at 2:20pm in the final pairing alongside first-round co-leader Madison Chen of Met PGA Jr Golf Club and 2021 champion Julia Zigrossi of Ridgemont Country Club.

Li and Chen were tied at 1-over entering the final nine holes in Horseheads. The difference was Li avoided any bogeys on the way in, while Chen slipped on Nos. 10 and 11 to begin opening a gap.

“On the back nine I was trying to keep my chill, not explode too much. I think playing with a friend and having fun kept me grounded most of the time,” she mentioned of Chen, who she’s become close with through junior golf.

“Having the good chemistry helped between us, cheering each other on and not having too toxic of an environment,” Li said about staying comfortable during the final round.

That proved to be the case as Li played the back nine of Soaring Eagles under par in both rounds, accumulating most of her mistakes on Nos. 1-7.

“It was tougher today, the wind definitely picked up towards the end when the sun was setting.”

Li is a past winner of the Drive, Chip and Putt National Finals. She won the Girls’ 12-13 age group in 2019 at Augusta National.

Chen, tied for runner-up honors with Lily Zhang of Park Country Club. Zhang was also the runner-up in 2021.

No player in the field posted a round below par throughout the 36-hole championship.

Ysabel Liu of Flushing finished in solo fourth at 148. Renna Chang of Harbor Links Golf Course rounded out the top five at 149.

2021 champion Zigrossi, who was one stroke off the lead after round one, quickly fell into issues during the final round on the opening hole, and was unable to recover from there to finish T8 this year.