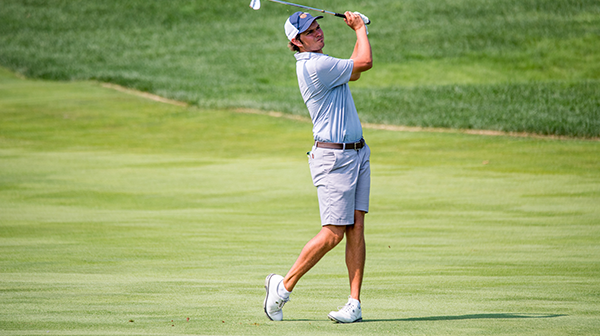 Six Players Under Par, Reichert Surges Back After Two Rounds at Men's Am

After shooting six-under 66 in his first round, Downey shot three-over 75 in his second round, making a two-day total of three-under 141. He now holds a one-stroke lead over the field.

“I actually did not hit the ball all that great today,” Downey said. “I had the lefts and then whenever I actually hit a good drive, it was just smidgeons off the fairway. I caught a couple bad lies in the rough.”

Downey noted that he felt the tempo was off in his driver swing, and that could have contributed to some of his errant tee shots.

“Other than that I felt confident and committed with every club that I hit. Some days it works out like it did yesterday,” Downey said. “If you’re not in the fairway, it’s a half a shot penalty at least. On my second nine today I started to figure that out. I made a couple birdies but never really got anything rolling.”

His birdies came on holes two and eight. The weather also played a factor, given there was a heat advisory, with temperatures climbing up to 90 degrees.

“It’s a long day, especially sitting around all morning,” Downey said. “I worked but you’re always thinking ‘I want to get out there and go’ but in the afternoon it got hot. Mentally and physically, it was draining, that’s for sure.”

After shooting an even-par 72 in his first round, Matthew Ferrari of Met PGA Junior Golf Club shot a 70 to climb into second place on the leaderboard.

“I’m just hitting everything really well and I’ve been making some 25, 20 footers for par the past two day and I made a good amount of birdies,” Ferrari said. “I felt good, I feel confident right now.”

The Siena College golfer is very familiar with his home course, Schuyler Meadows.

“I felt comfortable right away coming here,” Ferrari said. “I’ve been playing well too lately so it all is perfect for me...I’m feeling confident over the ball.”

He sunk three birdies on his front nine, including holes sixteen and seventeen.

Sitting with Ferrari in second is James Allen of Scarsdale Golf Club. He shot two-under on Tuesday, then went even today, collecting four birdies during his round.

He noted the par-three fourth hole was a good test. In the first round, the uphill tee shot was set at 187 yard. On Wednesday, it was shortened to 103 yards.

“It was definitely an interesting test of how to adjust to the elevation change with so much different of a shot,” Allen said. “Luckily I was able to hit a good shot past the hole and actually got some spin, which is kind of rare out here and had left myself 15 feet, which I made.”

Surging to a spot in the top five was the defending champion, Ben Reichert, of NYSGA eClub - Western NY. After shooting a 77 on the first day, he responded with a six-under 66 in his second round to break par at one-under 143. The 66 matches Downey’s opening round score as the two low rounds of the tournament so far.

“Today I kind of knew what to expect. I knew it was going to be firm and I accounted for it,” Reichert said. “The greens, especially yesterday, were about as firm as I’ve ever played I think. There were holes you couldn’t land on the green and keep it on the green.”

Reichert also noted that he didn’t feel he truly adapted to the course conditions until the end of his round yesterday. Today, he posted five birdies and an eagle on hole five.

“I was in between clubs I thought on my second shot, I decided to hit the less club and hit it hard and I don’t know how it landed where it did,” Reichert said. “It must’ve landed on the upslope, it stayed below the hole somehow. It’s the first time I’ve done that all week pretty much, and rolled in about a 20 footer.”

Reichert also played well on the three par fives on the Devereux Emmet design. His eagle came on the fifth hole, while two of his birdies came on holes two and thirteen.

“I would say that’s the key out here,” Reichert said. “Those par fives are pretty gettable. Everywhere else you’re kind of trying to not hold on, but a par’s pretty much a good score everywhere else and I was able to take advantage of the par-fives.”

Riechert is currently tied for fourth with 36 holes left to play. Joining him is Aiden Spampinato of Locust Hill Country Club, who was one of nine players to post a round under par (70), and Sean Puleo of the host club, Schuyler Meadows.

“I kind of struggled early on the front nine. I wasn’t getting up and down honestly, I wasn’t hitting it great,” Puleo said. “I knew from there I had to turn it around.”

After a double-bogey on twelve, Puleo rattled off three consecutive birdies.

“I hit the fairways,” Puleo said. “Then on fifteen, I put it to like an inch. It almost went in (for an ace).”

“I actually thought I shot one-under so that was a nice surprise when I came in,” Spampinato said. “My game’s been really good lately. I’m hitting all the right shots. Just gotta tighten up around the greens a little bit.”

Spampinato posted four birdies and two bogeys. He noted that his approach shots set him up for gettable putts.

“I played every hole smart, didn’t hit any crazy shots. My only bogeys were a couple three-putts on my first nine, which was the back nine, so just tighten up a little bit and I’ll be able to go pretty low,” Spampinato said. “I was hitting (my approach shots) all solid, all pretty much on a string. Not much curve to them, pretty much just aim and hit, which was nice.”

Four-time NYS titleholder Jamie Miller of Crag Burn Golf Club put in a round under par (70), and currently sits in seventh place headed into the final two rounds with an even-par 144 across his first two rounds. His most recent title came in the 2021 NYS Mixed Team. His other championships include the 2018 & 2014 NYS Men’s Mid-Amateur, and 2015 NYS Men’s Amateur Four-Ball.

Additionally, 2016 NYS Junior champion Christian Chapman (Cobblestone Creek CC) responded with a 69 in his second round after shooting an 81 on his first day.

There was a cut today to low 40 and ties (as well as anyone within ten strokes of the lead) after 36 holes that landed at 151, with 46 golfers making it through to the final two rounds.

Tomorrow, the Ganson Depew Cup is up for grabs as the field will play their final 36 holes, with a champion crowned at the end of the day.