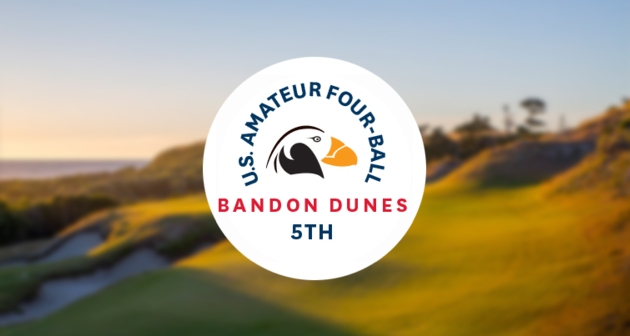 BANDON, O.R. (Update: May 28, 2019) – None of the teams representing the Empire State advanced past the first two rounds of stroke play during this week’s 5th U.S. Amateur Four-Ball at Bandon Dunes Golf Resort.

Kyle Roy and Connor Salanger put together the best performance out of the six NYS teams. The duo shot a 67 and 70 to finish at 137, two strokes under the cut line. Jimin Jung and Jud Langille finished close behind them at 139 (69 and 70).

James Scorse and Shawn Baker came in at 140. Jonathan Farber and Kyle Ritchie, as well as Jordan Kaplan and Steve Tarulli, finished at 143. Rounding up the New Yorkers were Matthew Meyer and Dave Staudinger, who finished at 151.

BANDON, O.R. (May 24, 2019) – Eleven New York golfers will travel across the country to compete in the 5th U.S. Amateur Four-Ball Championship, May 25-29, at the Bandon Dunes Golf Resort in Bandon, Oregon.

The six teams include James Scorse of Churchville and Shawn Baker of Rochester, Jimin Jung of Briarcliff Manor and Jud Langille of Ossining, Kyle Roy of Tampa, Florida (Syracuse native) and Connor Salanger of Camillus, Matthew Meyer of Pelham and Dave Staudinger of Rye, Jonathan Farber of Plainview and Kyle Ritchie of Garden City, and Jordan Kaplan of Plainview and Steve Tarulli of Rockville Center.

Sectional qualifying took place at 50 sites between August 27, 2018 and March 18, 2019. In total, 128 sides (256 players) from around the country will compete for the top spot in the upcoming competition.

Jimin Jung and Jud Langille of Trump National Golf Club Westchester qualified at the Lyman Orchards Golf Course in Middlefield, Conn. last August. The pair were medalists with a score of 66. Both players competed in the NYS Junior Amateur at Seven Oaks last season, where Jung finished tied in 7th and Langille tied for 11th. They will be among the youngest in this year’s championship field, with 16-year-old Langille being the fourth youngest, and Jung the fifth.

Kyle Roy, a Syracuse native who resides in Tampa, Fla., and Connor Salanger of Tuscarora Golf Club qualified at the Crag Burn Golf Club in East Aurora, N.Y. last September with a score of 67.

Kaplan of Pine Hollow Country Club and Tarulli of Hempstead Golf Course qualified at the Garden City Country Club in Garden City, N.Y. last October with a score of 64. This is the first U.S. Amateur Four-Ball appearance for both golfers.