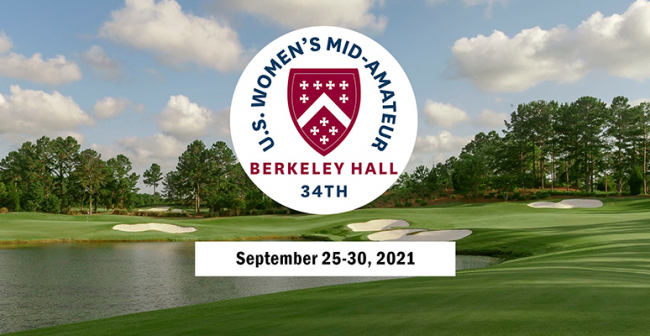 (Update - September 30) - Aliea Clark won her quarterfinal and semifinal match to become just the second 64th seed in a USGA champioship to advance to the final match at the 34th U.S. Women's Mid-Amateur.

She defeated Dawn Woodward, 4 and 3, in the quarterfinals before taking down Amanda Jacobs, 4 and 2, to advance to the championship.

Defending champion Ina Kim-Schaad was eliminated in the quarterfinals, falling to 1 up to Jacobs.

(Update - September 29) - All three New York State representatives won their Round of 32 matches at the 34th U.S. Women's Mid Amateur. Two of them advanced to the quarterfinals as well.

Defending champion Ina Kim-Schaad defeated Andrea Miller, 6 and 5, to advance to the final 16. Aliea Clark, the 64th seed, won over Ashley Freeman 3 and 2, while Talia Campbell won, 3 and 2, over Michelle Parrish.

In the Round of 16, Kim-Schaad defeated Lara Tennant, 4 and 2. Clark won 4 and 2 over Kaylin Crownover. Campbell was defeated in 19 holes by Blakesly Brock.

As the quarterfinals get underway, listed below are Kim Schaad and Clark's opponents:

(Update - September 28) - Three of the five New Yorkers remaining in the field at the 34th U.S. Women's Mid-Amateur Championship won their first match in the round of 64.

Defending champion Ina Kim-Schaad defeated Lauren Shoemaker, 5 and 4. Aliea Clark, who grabbed the last spot to make the cut, defeated the No. 1 seed Jennifer Peng, 1 up. Talia Campbell defeated Heather Wall, 6 and 5, to advance to the next round.

Christy Schultz lost to Andrea Miller, 2 and 1, while Alyssa Roland lost to Nonie Marler, 6 and 5, to be eliminated from contention.

Kim-Schaad, the defending champion, and Campbell were the highest finishers among New Yorkers. They each shot 7-over 151 to finish T17. Roland came in at T35, shooting ten-over 154. The eight-time NYSGA champion Schultz finished T51 with a 13-over 157 performance. Clark secured the final match play spot in a playoff.

After shooting 159 over two rounds, she entered a 5-for-1 playoff and birdied to advance to the Round of 64.

As match play gets underway listed below are the group's opponents and tee times:

The U.S. Women’s Mid-Amateur is a six-day tournament that consists of stroke and match play. Golfers begin with two rounds of stroke play over the first two days. Afterwards, the 132 player field is reduced to the low 64 players, then begins match play for six rounds. The championship will conclude with an 18-hole final on Sept. 30. The Berkeley Hall Club’s North Course will play at 6,246 yards and par 72 for the championship.

Campbell battled against Kim-Schaad in the championship match during the 2019 championship at Forest Highlands Golf Club, but eventually fell, 3 & 2. In her first year of eligibility, she finished stroke play as the No. 20 seed, and won a pair of dramatic matches in the Round of 64 and semifinals en route to advancing to the championship.

A former member of the Notre Dame women’s golf team, Campbell earned All-Atlantic Coast Conference honors in her junior (2014-2015) and senior (2015-2016) seasons, putting together one of the best collegiate golf careers in the program’s history. In high school, she was a two-time American Junior Golf Association (AJGA) All-American. Campbell also qualified for the 2020 U.S. Women’s Amateur, where she finished in 33rd place.

Clark was the medalist at a sectional qualifier in San Diego, California. Originally a California native, she gained New York residency while she's going to New York University for her Master's Degree. She competed in the 2015 U.S. Women's Amateur, where she advanced to match play. She placed sixth in the 2015 Southern California Women's Amateur Championship. She also competed on the UCLA women's golf team, graduating in 2018.

Kim-Schaad, who was runner-up at the 2000 U.S. Junior took a brief hiatus from golf to focus on her career before returning in 2016. She competed in the 2020 U.S. Women’s Open and the 2021 U.S. Women’s Amateur, though missed the cut in both events. She’s also won the Metropolitan Golf Association Women’s Met Amateur three times. Additionally this season, Kim-Schaad placed fourth at the Amateur Golf Alliance (AGA) Women’s Amateur Championship.

Oswald secured one of the last qualifying spots at a sectional qualifier at Suburban Golf Club in Union, New Jersey to punch her ticket to the championship. She won the 2012 NYS Women’s Amateur Championship at Teugega Country Club by five strokes, shooting three-over 219. She played collegiately at St. John’s, and pursued the LPGA Tour after graduation.

She played in Florida on the Suncoast Ladies Series Tour and the Minor League Tour, qualifying for three USGA championships along the way. She finished T25 at the 2012 Women’s Met Open Championship at North Shore Country Club.

Roland grabbed a qualifying spot at a sectional qualifier at Philadelphia Country Club. She played collegiately at Yale University from 2007-11, and won the 2010 Ivy League Championship as part of being named first team All-Ivy in her junior season. She was eventually named to the program’s All-Decade Team this past June.

She qualified for the 2017 championship at Champions Golf Club in Houston, Texas. She advanced past stroke play, but was eliminated in the Round of 64. Roland also finished runner-up at the 2020 Philadelphia Women’s Amateur, going four playoff holes before falling to Samantha Perrotta.

Schultz was a co-medalist at a sectional qualifier in Massachusetts. She is an eight-time NYSGA state champion. She has won the NYS Women’s Amateur Championship three times, first in 2004 at RTJGC at Cornell, again in 2007 at Oneida Community Golf Club, and 2008 at Wayne Hills Country Club.

In 2009-10, she won her first two Mid-Amateur championships at Drumlins Country Club (East) and Sodus Bay Heights Golf Club, then again in 2021 at Teugega Country Club, defeating Lauren Cupp in a one-hole playoff. She also won back-to-back Girls’ Junior titles in 1996 at Mohawk Golf Club and Gowanda Country Club in 1997.

Schuffenecker was one of two to grab a qualifying spot at a sectional qualifying event in New Hampshire. She played golf for one season at the University of Albany in 2013-14, earning a top ten finish in the Metro Atlantic Athletic Conference (MAAC) Championships.  She won the women’s club championship at Oswego Country Club in 2012. She recently competed in the PGA Club Championship at Pinehurst.

Listed below are the tee times in Eastern Time for the group's opening rounds of the U.S. Women’s Mid-Amateur: