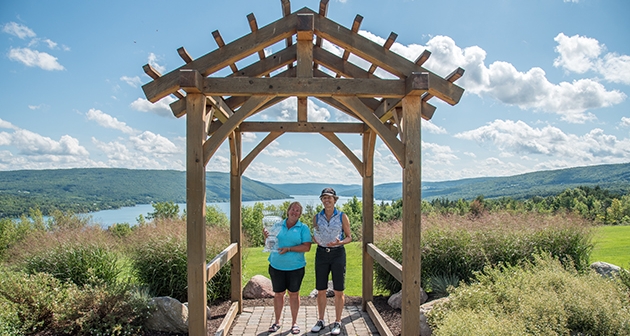 It was only her fourth attempt.

She led the field by three strokes after the opening round of play, and cruised to a four-stroke victory on the Robert Trent Jones Layout to once again hoist the Anne Coupe Cupp.

“I’m so excited and thrilled. A lot of people were rooting for me, and I appreciate that,” she said about the victory.

“They’re all very special. First one obviously because it’s the first at the state level. And then to repeat, when you don’t think you’re going to which was such an unexpected joy. This one, I’m speechless,” she said of the three wins.

Tied for runner-up honors, were 2019 NYS Women’s Senior Four-Ball Champion Carina Watkins of Beaver Meadows Golf Club and Penny Schiek of Hiland Park Country Club at 156. They played together in the penultimate group off #1 during the final-round shotgun.

“I didn’t know where I was in the standings. I didn’t feel like I started well, but I managed to not explode. I had four birdies on the round which I don’t tend to do in an event like this. Anytime I can have a 70s round anywhere I’m happy,” said Schiek.

The player from Rochester won by four strokes over past champion Michelle Marquis of Pompey Club (2014 winner at Kanon Valley).

Marquis finished as the runner-up at 161. She had a lead on Colliflower after the 6th hole, and the two battled back and forth throughout most of the round.

The final swing of momentum came on the 15th hole when Colliflower sunk a 12-foot birdie putt while Marquis made bogey. Colliflower regained a stroke advantage, and then parred out the final three holes to secure the title.

“It was hard for me, because it’s something I’ve always needed to work on. For some reason or another, I was calm today and made the shots that I had to. Got up-and-down and made some critical putts down the stretch.”

Colliflower’s best finishes in the Women’s Senior was two runner-ups, her most recent in 2014 at Kanon Valley. She began competing in the Super Senior division last year, and placed in third in her first attempt.

“She’s always had a great game and is a terrific competitor. We’ve been competing for probably twenty years. I just play my game as best I can. I was very happy with the way I played yesterday and today,” said Marquis.