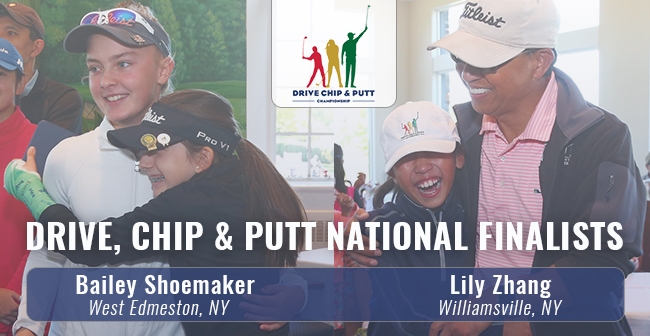 West Edmeston's Bailey Shoemaker (Seven Oaks Golf Club) finished T-2 in her age group with a total of 26 points (6-10-8) throughout the three stages of competition. She captured a perfect 10, besting the other nine competitiors in the girls 12-13 age group on the chipping portion of the finals.

Williamsville's Lily Zhang (Park Country Club) took 5th place in the girls 7-9 age group, and started the day off strong by securing a 10 with the longest drive at 167.8 yards for an early lead. Zhang finished 7 points behind the group winner with a total of 18 points (10-4-4).

The opportunity these players and the other 78 who joined them experienced was certainly once in a lifetime! Qualifying for 2019 Drive, Chip and Putt is now open for registration, sign up for a free local qualifier today and begin your road to Augusta!

9-year old Lily Zhang from Williamsville and 13-year-old Bailey Shoemaker from West Edmeston, advanced through multiple stages of qualifying to secure their way to the coveted championship at one of the world’s most premiere golf clubs…just a few days before the Masters Tournament begins.

The National Finals will be broadcast live on Sunday, April 1 at 8:00am EST on the Golf Channel. A live stream will also be played on DriveChipandPutt.com.

Each participant will compete in all three skill categories (Drive, Chip & Putt) and accumulate points towards their total. The participant with the highest number of points accumulated in each age and gender category, will be declared the overall champions.

Local qualifying began early last summer at 268 sites throughout the country. Zhang was one of three in the 7-9 age group to advance to the sub-regional. Shoemaker qualified out of Vesper Hills in the 12-13 group. Both golfers then advanced further through the sub-regional at Turning Stone and eventually punched their tickets to Augusta down in Winged Foot during the Regional in October.

Shoemaker made quite the impression on golfers across the state last summer, as she won the 55th NYS Girls’ Junior Amateur Championship by seven strokes in July, and maintained her momentum through the Drive, Chip and Putt qualifying stages that followed. Both her and Zhang will need to outscore nine competitors within their respective age groups to end up on top.

Regardless of how either player finishes, the opportunity to compete at the National Finals is a huge accomplishment already. Plus, each competitor’s trip includes tickets to Monday’s Masters practice round and a chance to see some of golf’s biggest stars up close and personal.