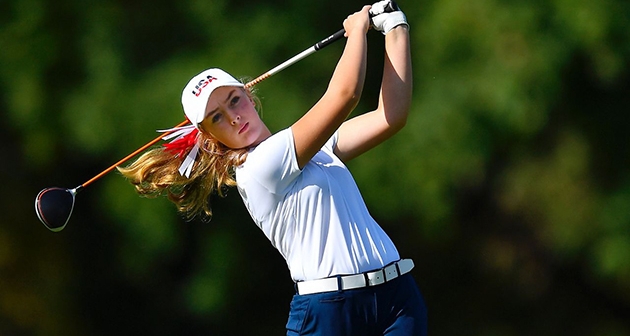 The three-time NYS Girls’ Junior Amateur Champion (2017-19), was one of two girls, and four junior players (14 and under) selected to compete on the American team during the international competition where 15 countries were represented.

Shoemaker was the individual girls’ winner, posting even-par 213 in 54 holes, four shots over her teammate Sara Im of Duluth, Georgia. The member of Seven Oaks Golf Club in Hamilton, led the field after the opening round, was tied for the lead after round 2, and posted a final-round 2-under 69 to capture the title. Shoemaker finished both her first and third rounds with eagles on the par-5 eighteenth hole, serving as exclamation points on her notable victory.

“This week was so much fun, our team had so much chemistry and we bonded really well so that made the win even better,” said Shoemaker to LPGA media. “It was incredible being able to play at an LPGA major course, especially when the course was in such pristine condition.” She noted of the Evian Resort Club.

The success of Shoemaker and Im strongly contributed to Team USA’s third consecutive team win over the field, and they did it in record-setting fashion. The team bettered the field by thirteen strokes, and swept all categories during the competition.

In the boys’ individual competition, Eric Lee of Fullerton, California took first place with a score of 1-under 212.