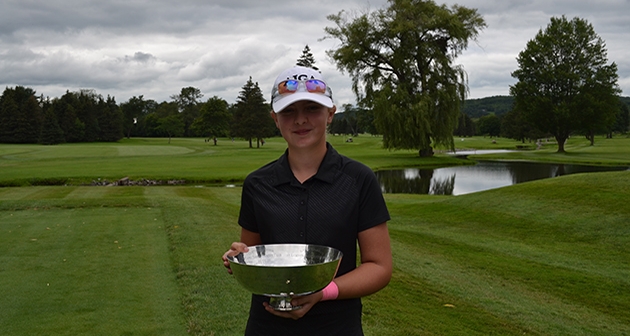 During Wednesday’s final round, her 1-over 73 was more than enough to maintain a comfortable distance from the field.

The only two players close enough to catch Shoemaker were Melanie Green of Shelridge Country Club and Emma Shen of Rockland Country Club, who joined her in the final pairing. Both players struggled in the final round and unable to stay within reach.

Two girls in the second-to-last group tied for the runner-up honors including last year's 2nd place finisher Taylor Miano of Dobbs Ferry and Faith Francioso of Wantagh, at 7-over 151.

Still, Shoemaker wasn’t sure her round would be enough to win until she entered the scoring area. “I figured one of the girls behind me could post a low number today,” she stated. “I didn’t realize I won until Taylor (Miano) jumped on me.”

The young champ’s final-round highlights included a 20-foot birdie on the par-4 thirteenth hole and an impressive eagle on the par-5 fifth where she cut the corner off the tee and landed her ball over the left-side tree line to the fourth fairway. From there, she was on the green in two and sent her putt screaming towards the cup where it fell from fifteen feet to Shoemaker’s surprise. “I thought I was a bit lucky. That putt was okay but I didn’t think it was in. It was a confidence booster for sure.”

Luck had nothing to do with the way Shoemaker played over the past two days. Now a member at the host club, she’s put in countless hours of practice into her game and has been preparing for this championship all summer with one goal in mind.

“My goal was to do better than last year and I met that goal.”

Most twelve-year-olds wouldn’t set the bar so high but Shoemaker is not your average twelve-year-old player. Last year, she ended up in a tie for third alongside Caroline Hodge of Larchmont, behind Lindsay May (2016 winner) and Miano. During her first NYS Girls’ Junior appearance in 2015 she finished in the top-10 at age ten.

She’s also won several major national and worldwide tournaments in her age group, most notably at the 2015 European Championships in Scotland.

The Betty Deeley Trophy will remain at Seven Oaks until next year’s championship where Shoemaker will try to defend the title once again on her home turf. She’ll be thirteen then and even if she doesn’t pull it off, she’ll still have plenty of shots at it (until 2023).