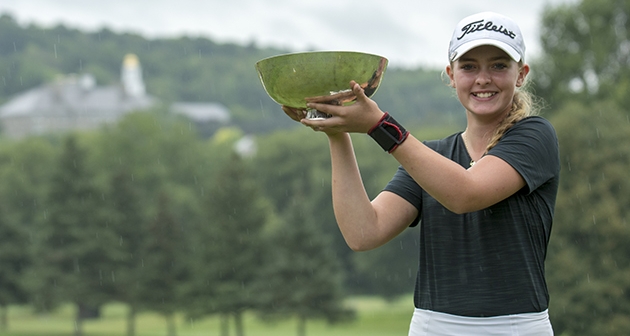 The young star from West Edmeston secured her victory with a 2-under 34 on the shortened second round to win by three strokes at 1-over 109.

In second was Elena Lopez who was also in red numbers in the second round, which was conducted as a shotgun off the back side of the course, and finished at 112 (77-35).

Emily Gresham of NYSGA eClub – Southern Tier had a hole during the opening round on the uphill par-3 second hole from 123 yards out. She finished at 118.

After opening with a 75, Shoemaker had a one stroke advantage over the field. In her second round, which was reduced to nine holes due to inclement weather, she began on #10 and attached the course right away, knocking down a birdie. She parred out on the rest of the back side of the course until the home hole, where she finished on a high note. Another birdie, from fifteen feet out.

“I have been struggling with putting quite a bit the past few weeks, when normally it’s a strength. It was a lot better today,” Shoemaker mentioned. “I had four par putts that barely dropped. I was shooing them all in.”

Joining her in the final pairing was runner-up Lopez of Crag Burn Golf Club and Pasqualina Tartaglione of NYSGA eClub – Mid Hudson, both 18 and will be graduating from the junior ranks after this summer.

“It was the last time I was ever going to play Pasqualina in a junior tournament. I played with her during my first junior at 10,” said Shoemaker referring to the 2015 Championship at Cedar Lake Club. “Getting paired with her during her last one was amazing.”

Playing with a friend to ease the nerves during a competition can surely help to manage the pressure, but Shoemaker doesn’t seem to have a problem with pressure. Each round is just another opportunity for her to play golf, and have fun attacking a course’s layout.

“I don’t ever think of nerves. It’s just another day on the golf course. I just play my own game, stick to fundamentals and always try do my best.”

She even mentioned how she wanted to play a full 18 holes that was originally scheduled for the second round, and was disappointed to hear she was only playing nine instead. “I just wanted to play. I absolutely love playing here, my home course. It’s always in great condition and a lot of fun,” and her viewpoint doesn’t alter either, even when it’s raining and miserable out.

Lopez had a similar scorecard on Wednesday’s closing nine, with eight pars and a long birdie on the last for a 35 in red ink. “It’s a really good feeling because I’ve been struggling a lot lately,” she said about her finish.

This was Lopez’s last Girls’ Junior and her fourth appearance overall, with this year’s finish being her best.

Isabella Diaz of NYSGA eClub – Capital District, who finished in eighth at 117, also shot a 1-under 35 to close. Her card was a little different than Shoemaker and Lopez’s, with three birdies on Nos. 11-12-16 and a double on 13.

Shoemaker will be back next year to defend, and has five more chances to tally on more titles. Her chances will likely only improve, as she has been playing in more and more nationally-ranked championships.

This victory is another thing she can cross off her list of goals for the season. Since April, she’s competed in the Drive, Chip and Putt National Finals at Augusta National and finished second in her age group, competed in the U.S. Women’s Amateur Four-Ball at El Caballero, played in the PGA Girls’ Junior Championship in Louisville earlier this month and then the U.S. Girls’ Junior Amateur in Poppy Hills last week.

Next year, she’ll have the opportunity to potentially join only two past champions with three consecutive victories, including Kerri Murphy from 1993-95, and Nannette Hill from 2000-2002.

In the meantime, she’ll play a few more AJGA events this summer and look to continue to improve her game. Next year, she hopes the championship comes back to her home club, Seven Oaks, but will have a great opportunity no matter where it’s inevitably held.