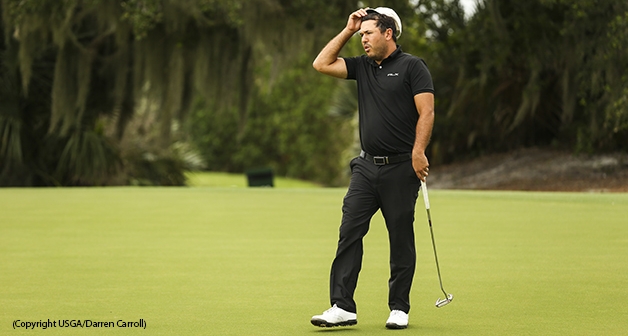 Goldstein Falls in Round of 32 at 4th U.S. Amateur Four-Ball

UPDATE (May 21, 2018) - Darin Goldstein, and his partner Trevor Randolph of N.J., fell during the match play round of 32 at the 4th U.S. Amateur Four-Ball Championship. After finishing stroke play qualifying tied for 16th at 4-under 136 (68-68), they were seeded 23rd in the bracket and faced off against two southerners, Hayes Brown/Jack Larkin, and lost 3&2.

Others from New York who missed the cut were duo Michael Lewis-Goldman/Thomas McCarthy, Timothy Connors of Rye and his partner, both finishing at 146 (+6), and Peter Anderson who's team finished at 150 (+10).

Within the 256-player field making up 128 sides, seven (7) players are from New York State.

Smith of Orchard Park and Juno Beach, Fla. is the oldest player in this year's field. The 69-year-old, is more than double the age of his partner, Jamie Miller of Orchard Park (32), and they hold the largest age difference between teammates in the field. Both players have won New York State titles, with Smith claiming the last two NYS Men’s Super Senior Amateur Championships and Miller winning the NYS Mid-Amateur Championship in 2014. Miller also captured a NYS Men's Amateur Four-Ball title in 2015 with another Buffalo-area player, Billy Hanes.

Miller & Smith qualified in September of 2017 at Park Country Club in Williamsville. They took the second of two spots and shared co-medalist honors with a duo from Canada at 65.

Goldstein, who finished runner-up in last year’s NYS Men’s Mid-Amateur at Yahnundasis GC, will be playing alongside Trevor Randolph of Franklin Lakes, N.J. The two Met-area players qualified out of Metropolis Country Club this past fall.

The Empire State players will open the championship stroke play rounds on Saturday at the Hills Course and move over to the Village Course on Sunday. Their tee times are as follows: