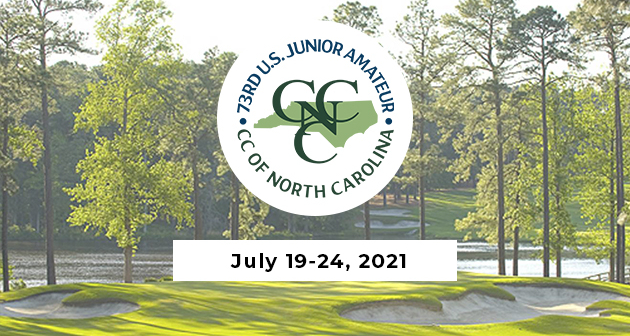 Seven New Yorkers in Field at 73rd U.S. Junior Am

Luke Sample had the top result of the group with 6-over 149, two strokes off the cut line.

The U.S. Junior Amateur consists of 36 holes of stroke play on July 19 and 20, after which the 264-player field will be reduced to the low 64 scorers. There will be six rounds of match play, starting July 21. The quarterfinals and semifinals are slated for Friday, July 23. The championship is scheduled to conclude with a 36-hole final on Saturday, July 24. The U.S. Junior Amateur champion receives a full exemption into the 2022 U.S. Open Championship.

Berl earned admission by shooting one-under 70 at a sectional qualifier event at Yahnundasis Golf Club on June 14. A rising senior at Victor Senior High School, Berl recently placed second in the Coca-Cola Junior Championship in August 2020. Before that, he secured five consecutive top-15 finishes on the Hurricane Junior Golf Tour, including a victory at the Turning Stone Junior Open and placing top 10 in four of those events.

Burke is a member of the PGA Metropolitan Section Tour, and was a co-medalist at the Bonnie Briar Country Club sectional qualifier.

Conway finished second at the Yahnundasis sectional qualifier event. He recently earned a T35 finish at the AJGA Junior Championship. He also finished T3 at the Billy Horschel Junior Championship, shooting six-under 210 in his 54 holes of play. The George Mason University commit was a top-ten finisher in the 2019 NYS Boys’ Junior and clinched third place at the 2017 NYS Boys’ Sub-Junior.

Finn finished second at a sectional qualifier in New Jersey to punch his ticket to the U.S. Junior Open. The Locust Valley native recently won the Nassau County boy’s championship, and is a member of the PGA Metropolitan Section Tour. He was named Newsday’s Player of the Year, and selected to the All-Long Island boy’s golf team.

Hiller finished third in the New Jersey sectional qualifier to secure a spot. Less than a month ago, the NYC native won the Mahoning Valley Hospital Foundation Junior All-Star championship. Last August, he finished second in the AJGA Junior All-Star at Toftrees. The PGA Metropolitan Section Tour member competed in the National Drive, Chip and Putt championships at Augusta National in 2015 as well.

Sample earned an exemption from this year’s tournament after being a top 85 age-eligible points leader in World Amateur Golf Ranking. He is currently No. 14 on the Junior Golf Scoreboard rankings, having already committed to Duke to play golf in the fall. Sample is a three-time NYS titleholder, capturing the last two Boys’ Junior titles (2019, 2018), while also winning the Sub-Junior in 2017. He was named 2020 Metropolitan Golf Association Junior Player of the Year following a record-setting season in which the 17-year-old became the first player in history to win both the Met Junior Championship and Met Open Championship in the same season.

Roessler qualified at Bonnie Briar Country Club, finishing T2. He was top-15 in the Metropolitan Golf Association’s 2019 Westchester Junior Player of the Year Standings. In January, Roessler finished runner-up at the Hurricane Junior Golf Tour’s Palm Beach Junior Open. He is committed to The University of Pennsylvania to play golf in the fall of 2021. He was a top-5 finisher in the 2019 NYS Boys’ Junior Amateur.

Listed below are tee times in Eastern Time for the group's opening rounds of the U.S. Junior Amateur: