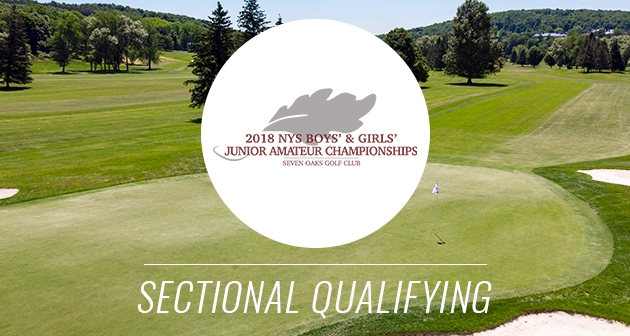 JAMESVILLE, N.Y. – The New York State Golf Association (NYSGA) has accepted a total of 147 entries for the 2018 New York State Boys’ & Girls’ Junior Amateur Championships at Seven Oaks Golf Club in Hamilton, N.Y. The championship will be conducted at Colgate University’s course for a third consecutive year and fifth time in the championship’s history, sixth for the Girls’.

To be eligible, a player must have an active Handicap Index and be a resident of New York State, or, if not a resident, are dues paying members of an NYSGA member club.

Among this year’s total are 18 players in the Boys’ Junior who are fully exempt into this championship.

Sectional qualifying, played over 18 holes, will be conducted for players in the Boys’ Junior at 10 sites around New York from Tuesday, June 26 to Thursday, July 12 at the following venues:

Any players tied for the last qualifying spot or any alternate position (2 alternates for fields with over 10 players, 1 alternate for fields under 10 players) at a qualifier will compete in a hole-by-hole playoff to determine who advances. If a playoff is impossible due to weather or darkness, the USGA method of matching scorecards will be used.

The Boys’ Sub-Junior and the Girls’ Junior will not have sectional qualifying this season. All registered participants will be invited to compete in the 2018 championship.

Listed below are the exemption categories for the 2018 Boys' Junior Amateur Championship: