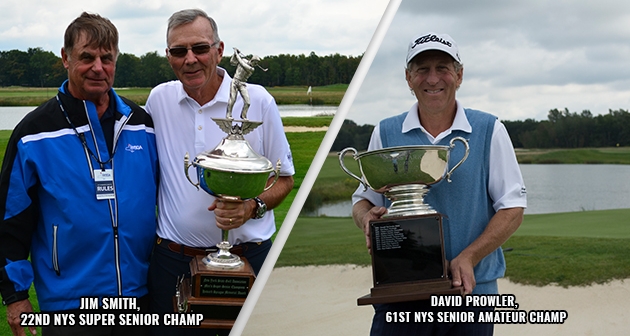 In the 61st edition of the Men’s Senior, David Prowler registered another 72 throughout the final round, a score that bumped him into the lead yesterday, to win the championship by four strokes totaling 219 (+3) over three days.

Stu Harris, of Locust Hill Country Club, finished as the runner-up for the second consecutive year at 223 (+7).

Last year’s champion, Paul Pratico, recorded a 74 during the final round to finish at 10-over 226.

Prowler jumped into the driver seat yesterday after carding an even-par 72 and repeated the score during today’s final round with consistent ball striking and patience throughout the heather-laden course.

“I was surprisingly relaxed this morning. This was a very good golf course for me because there was a lot of fescue and I drive the ball very straight,” he stated.

He began the afternoon one stroke ahead of fellow Bethpage State Park player and good friend, Dennis Lynch. The two went neck and neck throughout the front nine and were tied for the lead during holes No. 2 – 4. On the fifth hole, a 178-yard par-3, Prowler reclaimed a one stroke lead after Lynch missed his 10-footer for par and Prowler made his putt for the same. “That was huge. My putter behaved itself, that was the key,” Prowler said about the round’s turning point.

On the back nine, Lynch went wayward on a few shots and lost three strokes in three holes to Prowler. From there in, Lynch was unable to swing momentum back into his favor while Prowler maintained pace through the finish. “I kept hitting every single green so I was in good shape. It’s a wonderful win. I’m really excited,” he added.

Harris, who won both the Rochester District Golf Association Senior Match Play Championship in May and the Senior (stroke play) Championship a couple of weeks ago, was finding plenty of birdies throughout the Championship with eleven total. His final round 73 couldn’t catch the leader after a few mistakes early this week proved to be costly. “I just couldn’t overcome the three double bogeys and triple bogey I had in the first two rounds,” he admitted. “I’m really happy with how I played this week but in spots it got away from me.”

Pratico kept his score at 76 or below all three days to claim the third spot and win his age group (55-60) and was overall satisfied with his finish as well as the venue.

“I got some putts to fall today, which was nice. The greens really toughen up this course. That was probably the biggest thing for me to get used to and figure out,” he elaborated. “It was a unique design, I really enjoyed playing here this year.”

In the 22nd Super Senior Amateur, Jim Smith captured his second consecutive title in the championship after carding three 72’s to finish at even-par 216 and win by nine strokes. His three-day score sets a record for the lowest winning total with 216, (previously held by Earl Winchester with a 217 in 2013), the lowest winning total in relation to par at even (breaking his own record set in last year's championship at 4-over 220), and tied the record for the widest margin of victory in the championship’s history (originally set in 2001 by Coville Windsor at Niagara Falls Country Club).

All of this, at his home club.

“It was a good field with a lot of good players. It’s certainly an honor to win twice. It’s a huge advantage playing at your home course. I grew up at Brookfield Country Club (last year’s venue), so it had a home course feel as well.”

Finishing nine strokes back was John Hamilton of Hudson National Golf Club, who managed the only under-par round in this year’s championship.

Smith’s formula for success throughout the week was straight forward. “Hit fairways and greens. Same as yesterday and the day before.”

The ex-doctor who’s played competitively for years and recently appeared in the 2017 US Senior Amateur (where he barely missed the stroke play qualifying cut), is comfortable with the pressure of championship golf. “You have a few butterflies, but you’re not too nervous.”

Age group winners were awarded prizes for both championship divisions in the following categories: