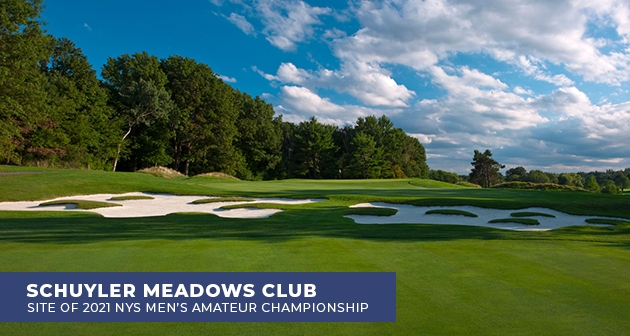 The 98th edition of the NYSGA’s flagship tournament, the NYS Men’s Amateur Championship, will be contested at Schuyler Meadows Club in Loudonville, August 10-12. Established in 1927 and designed by Devereux Emmet, this classic facility has offered its venue for several state championships over the decades, including a previous Men's Amateur in 2013, Women's Amateurs in 2017 (which included Mid-Am), 1976 and 1955, along with a Boys' Junior in 1938.

For the fifth consecutive year, Seven Oaks Golf Club in Hamilton will home the 2021 NYS Boys’ & Girls’ Junior Amateur Championships, July 27 - 28. The Colgate University course designed by Robert Trent Jones, Sr. in the late 1950’s, has hosted its share of NYS championships over the decades including two Men’s Amateurs in 1993 and 2001, the Women’s Amateur in 1983, the Girls’ Juniors in 1967, 1975, and 1988, and the Boys’ Junior & Sub-Junior in 1971 and 1978 before the three junior championships were combined in 1998. The course has hosted nineteen state junior tournaments between the three divisions since 1967.

The 37th NYS Men’s Mid-Amateur Championship is headed to Shaker Ridge Country Club in Albany, September 24-26. This will be the second time the 1929 Jim Thompson design will host the championship, the first coming in 2004. The club also hosted a Boys' Junior and Sub-Junior tournament in 1997.

The 68th NYS Women’s Senior Amateur & 14th Super Senior Amateur Championships will be welcomed by Pinehaven Country Club in Guilderland, August 24-25. The course, located in the historic Pine Bush area of Albany County, was established in 1960. This will be their second time hosting this championship, with the inaugural taking place in 1991. In addition, the venue hosted NYS Men’s Amateurs in 1998 and 2008, and a Women’s Amateur in 2002.

Finally, the 8th NYS Amateur & Senior Amateur Mixed Team Championships will head to Rochester’s Brook-Lea Country Club on June 14. The Donald Ross layout designed in 1926 hosted the Women’s Amateur in 1986 and the Men’s Amateur in 1991.

The NYSGA would like to thank the leadership and staff at each of this year’s host clubs for their support of the association and in helping to continue the tradition of great competitive amateur golf in New York State. Many of these venues, were origionally scheduled to host their respective championship event in 2020, before the season was canceled due to the COVID-19 pandemic. We are sincerely grateful for their flexibility during this unprecedented time, and allowing us to use their venues as host sites in 2021.

Tournament registration is set to open on March 15th via Tournament Management powered by Golf Genius Software, which you can access by clicking here.