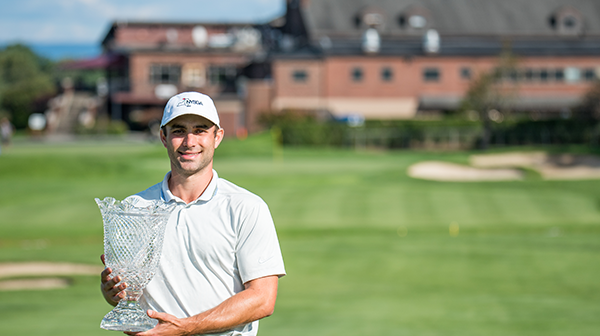 Schimenti held his three-stroke lead that he built after Saturday’s second round through 15 holes on Sunday. On the tough finishing stretch, he bogeyed 15 and 16, and double bogeyed 17 to drop to three-over heading into the final hole.

“Three putting from 25 feet just off the green was kinda tough,” Schimenti said. “Again a three-putt from the fringe on 16. Then my only bad swing on the back nine was the tee ball on 17. We lost one right and was trying to be aggressive, hit the driver and sometimes that happens when you swing at it hard.”

That gave Chris Blyth of Locust Hill Country Club the opportunity to climb back. After a birdie on hole 14, he parred the rest of the way to stay at three-over, and awaited his fate as Schimenti teed off on his 54th hole of the championship.

“My playing partners and myself, we were checking the leaderboard on the whole back nine,” Blyth said. “I kind of knew where I was, going down 17 and 18.”

Schimenti hit the green’s upper tier on the par-four eighteenth hole in two shots, setting up a difficult downhill putt. He sent it nearly 20 feet past the hole.

“I wasn’t feeling too good and it was long enough of a putt that it wasn’t a short tester,” Schimenti said. “I could give it a full stroke. These greens are really subtle and sometimes you’re trying to read a break where there isn't some.”

Looking at an uphill putt, Schimenti hit it straight on and sank it to send the championship to a playoff.

“On that putt I was looking for a break, didn’t see any so I basically ended up just playing it straight and hit it hard enough,” Schimenti said. “That was a good read on my part. That gave me a lot more confidence heading into the playoff.”

Teeing off from the first hole, Schimenti and Blyth each two-putted for par. On the second hole, Blyth’s approach shot landed about 40 feet above the hole. Schimenti placed his approach on the fringe in front of the green about 12 feet short of the flag.

Blyth three-putted, while Schimenti set himself up for a tap-in par to win the championship.

“I think I was just really smart leaving it short of the hole on the fringe,” Schimenti said. “It feels great. It’s really probably my biggest win ever...I felt like I really played well this week and was deserving of being up there, at least in contention.”

Blyth added, “My playing partners this morning had the same exact putt so I knew that it was fast and that it would run away from me if I hit a bad putt, so I knew I had to baby it down there. I just mishit it and misread it and it just got away from me, so it was kind of unfortunate.”

Schimenti, who also won the Tompkins County Amateur this summer, has participated in three additional NYS Men’s Mid-Amateur championships. His highest finish was fifth place in 2018.

“It’s nice to finish it off. The NYSGA events are the big events on my calendar, so that means a lot,” Schimenti said. “Down the stretch, I hit some bad short game shots and kind of bled (the lead) away, but really overall, five-over on a day like today was still not a bad score.”

Blyth’s second place finish came in his first mid-amateur appearance. He finished runner-up at the NYS Men’s Amateur in 2018 and 2019.

“I was pretty happy that I made it to that point without playing at all coming into this week so I was really proud of myself for battling and getting into the playoff,” Blyth said. “Being runner-up the first time is good...hopefully one of these days I’ll break through and get the win.”

With a two-under 69 in the final round, Darin Goldstein of Deepdale Golf Club finished in third place, shooting four-over 217 for the weekend.

Billy Hanes of Crag Burn Golf Club and first round co-leader Jimmy Pizzutelli shared fourth place at six-over to round out the top five.

The top 20 finishers will receive an exemption to the 2022 NYS Men’s Mid-Amateur at a site to be determined.