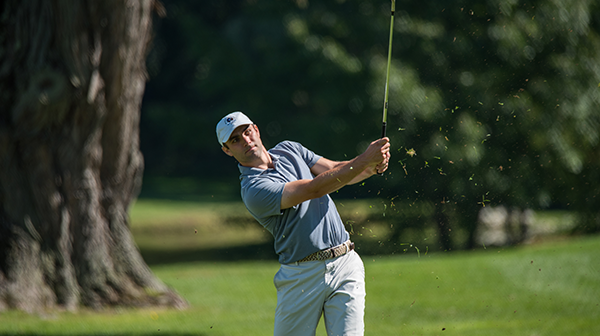 The Cornell University Golf Course member carded a one-under 70 in each of his first two rounds to build a three-stroke lead headed into Sunday’s final round.

“They were pretty similar rounds,” Schimenti said. “I think I left myself in good spots on the greens. Really quick greens here and enough slope to kind of scare you if you’re above the hole so just keeping my approach shots on the right sides of the holes, hitting the middles of greens and not really trying to go out and get birdies, just putting it in good spots.”

Schimenti posted all three of his birdies on the back nine during Saturday’s round.

“I think that part of the golf course suits me,” Schimenti said. “I can hit driver on 13, 17 and 18 and for me that’s the strength of my game. I can use my length to my advantage for those couple holes. It’s a scorable part of the course in general...Those holes fit my eye and there’s some opportunities there.”

Headed into tomorrow, Schimenti is focused on keeping his approach shots sharp.

“Tomorrow it starts with getting it in play off the tee. There’s a good amount of room out here, but the approach play will be big,” he said.

Jimmy Pizzutelli, who was tied for the lead after one round, currently holds sole possession of second place after shooting a 74 today.

“It was kind of a grind out there today,” Pizzutelli said. “Wedges weren’t as good as they were yesterday. I didn’t hit it as close as I did yesterday, so 74 is not a bad score. I actually made a couple putts that kept me in it. Didn’t hit it great off the tee.”

The Park Country Club member’s best stretch came on holes 12-16, where he sandwiched a stretch of pars around birdies on 13 and 14.

Gifford carded a 72, highlighted by a stellar back nine that included five birdies.

“I was feeling pretty good going into 18,” Gifford said. “Hit two what I thought were really good shots. The second shot I thought was all over the flag. It was about a half club long to a back right flag and got me in some serious trouble...excited to be in the final group tomorrow. Would have liked to have not given up three strokes but it was a good experience.”

Gifford ended up with a triple-bogey on 18 to conclude his round, though he’s still in position to challenge Schimenti on Sunday. His best stretch of golf came on holes 10-14, where he birdied four of the five holes to begin the back.

“I made a couple of good putts but honestly I played pretty conservative,” Gifford said. “Typically on short drive par four’s, I’ve always been one to go for it and they made 11 and 14 drivable and I laid back on both of them. Then I hit really good wedge shots on both holes, converted both putts. So that was different from what my normal strategy would have been...my putter was feeling pretty good so I was relying a lot on my wedge game, which was pretty good today.”

Blyth posted a 74, with three birdies.

“I got off to a good start on the first eight holes,” Blyth said. “I was one-under through eight and then I hit a rough patch on nine and ten with a couple of unfortunate breaks. I birdied 13 and 17, then parred the rest, so that kind of helped me get back on track.”

“I knew that the tees were up today so I thought it was a good birdie opportunity, so I hit a good drive, hit an okay second shot, and then got up and down so that was a good moment in the round.”

The field was cut to the low 30 players and ties, which fell at 10-over 152. The 34 remaining players will compete in 18 more holes on Sunday to decide a champion. The top-20 finishers tomorrow will earn exemptions into next year’s championship.