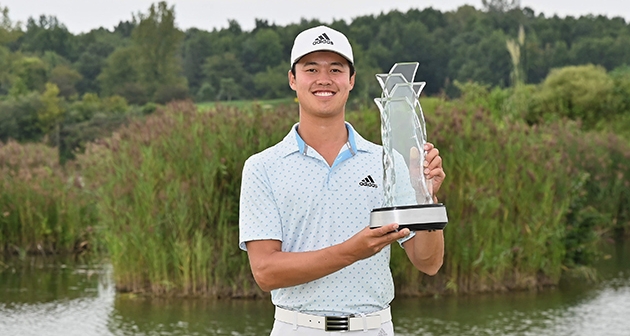 NEWBURGH, IN. – A bogey-free, final-round 7-under 65 propelled Scarsdale’s Brandon Wu to win the Korn Ferry Tour Championship at Victoria National.

This marked the first professional victory for the 23-year-old, who secured the tournament by one stroke, finishing at 18-under par.

“It’s almost surreal. I mean, I think just over a month and a half ago I was still playing Monday qualifiers and just hoping to get kind of a schedule going,” Wu told PGA Tour media after the victory.

It was his sixth Korn Ferry Tour start of 2020 and the eighth of his young career. In his previous five starts this season, he made four cuts and two top-10s including a T2 finish at the Albertsons Boise Open.

With this victory, Wu has secured a spot in the 2020 US Open as well as PGA Tour additional events for the 2020-21 season.

The recent Stanford University graduate competed in last year’s U.S. Open at Pebble Beach as an amateur and finished T35. This year, he’ll be competing at Winged Foot only a few minutes down the road from where he grew up. His home course is Scarsdale Golf Club.

“It just hasn’t even set in yet. I’ve run through this scenario so many times the past few days, what would it feel like going home and getting to play and getting to tell my friends I can play this year, so it’s hard to believe at this point,” he said. “I’m just really happy how it unfolded.”

Another New York native, Dan McCarthy of Syracuse, gained a U.S. Open spot after finishing T3 this week. McCarthy and Wu, were two of five players that earned entry based on the three-event 2020 Korn Ferry Tour Series.

This will be McCarthy's second U.S. Open appearance. His first was in 2010 at Pebble Beach Golf Links, where he missed the cut. The 35-year-old Le Moyne College alumnus turned professional in 2007. He recorded four wins on the Mackenzie Tour-Canada in 2016. His lone Korn Ferry Tour victory was in 2019 at the Savannah Golf Championship. In 2020 on the Korn Ferry Tour, he's recorded three top-10 finishes including T2 at the Albertsons Boise Open.