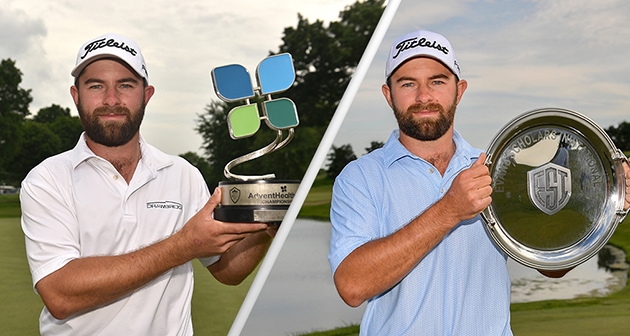 JAMESVILLE, N.Y. -- Ten months ago, amid the uncertainty of the COVID-19 pandemic, Cameron Young was one year removed from playing collegiate golf at Wake Forest University. Young enjoyed a decorated career with the Demon Deacons, earning All-Atlantic Coast Conference and Ping All-East Region honors from his sophomore to senior seasons. He became the first amateur to win the New York State Open in 2017, winning in a two-hole playoff, while even qualifying for the 2019 U.S. Open as a senior in college.

Although, at this moment in 2020, Young was vying for a shot at the Korn Ferry Tour. The pandemic put a halt on qualifiers and other events, but Young got his chance in July, during a Monday qualifier for the Pinnacle Bank Championship. He proceeded to go on a four-tournament stretch that changed the trajectory of his career, finishing within the top 15 of each event to earn a Special Temporary Membership.

He nearly won the Nationwide Children's Hospital Championship, his fourth tournament on the Tour, in August -- finishing runner-up. After nine more months and twelve tournaments, Young finally broke through, clinching two tournament victories in back-to-back fashion to close out the month of May.

At the AdventHealth Championship on May 23, the Scarborough native finished 19-under to secure his first victory on the Tour in his 17th event. He sat atop the leaderboard for the entire tournament, shooting a 68 in his final round to finish two strokes ahead. Young finished the tournament shooting 64-69-68-68 in his wire-to-wire victory.

A week later, at the Evans Scholars Invitational presented by First Midwest Bank, Young again never vacated from the top spot, holding a solo lead for all but one round. He finished 18-under to become the 10th player in Korn Ferry Tour history to win back-to-back tournaments, and the first in eight years. This puts the 24-year-old in company with the likes of Tommy Armour III, who accomplished the same feat in 1994.

“I feel like my good has always been good enough to win,” Young told the PGATour.com staff. “I drive the ball a lot better than I have previously. It's something that's improved dramatically over the last year or two. You can look back and say I missed a bunch of cuts early this year, but it wasn't that different. It's just a little bit here and there and not being as comfortable on the greens, and that really has changed how I feel out here and has dramatically changed my scoring. Just that little bit of confidence in making one or two more a day is adding up a lot.”

Reflecting on his journey of a little under a year since having no status on the Korn Ferry Tour, Young told the PGATour.com that it was overwhelming at times, especially at the outset.

“Like all of a sudden showing up to my fifth or sixth event and being allowed to come play, because for a while it was really unattainable. Playing Monday qualifiers and shooting 4- and 5- and 6-under a lot and you just don't even have a chance with those scores a lot of the time. So yeah, it's been a grind, for sure.”

Young is currently ranked No. 13 on the Tour. A third consecutive victory would have sent him straight to the PGA Tour, although he came up short this past weekend at the REX Hospital Open. With 11 events remaining on the Korn Ferry Tour, Young could earn the promotion if he finishes the season within the top 25.