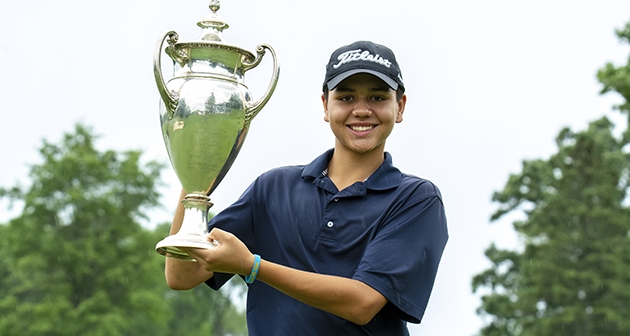 Sample Wins in Playoff to Secure Another State Title

After thirty-six holes, Sample of NYSGA eClub - NYC and Nic Whittaker of Country Club of Ithaca were tied atop the leaderboard at 1-over 145 (both shooting 73-72).

The two players were paired in the final group together, along with Stephen Bicks who also opened at 73. Sample heated up quickly with birdies on Nos. 2 and 3, and made the turn three strokes ahead of both Whittaker and Bicks.

On the back, Sample continued his steady and consistent play while Whittaker began to gain momentum and found a rhythm.

“I was able to get things rolling going into the backside which I needed to do,” Whittaker said about his 34 coming in.

The 18-year-old from Ithaca began with bogeys on three of the first four holes, but discovered a flaw in his setup and then regained control of his ball striking. “The one simple thing just fixed my whole round,” he mentioned of closing his club head face down. “I was able to pull it together and recover from those poor holes.”

That change was essential, as he battled back with birdies on twelve, sixteen and then finished with a 20-foot birdie on the home hole to force the playoff. “I had no idea I was within reach of him. Once I made my putt on 18 he told me I had just tied him. I thought I was a shot back and needed to eagle the final hole to have a chance.”

Sample, who was keeping Whittaker’s card confirmed that they were tied at 145, a score that held up for first place.

The playoff began on the twelfth hole, a 521-yard par 5. Both players placed their drives along the left side of the fairway. From there, Sample went first and left his shot about 20 feet short of the hole but perfectly in line with his target. Whittaker’s second shot managed its way into the front right greenside bunker, in which he unable to get up-and-down from. Sample pushed his first putt within two feet, tapped in his birdie, and secured his place once again in New York State Junior history.

“The playoff hole was a good par 5, and I think I can attack it pretty well. I felt a little adrenaline going into the second shot, took less club and felt it was one of the best swings I had all week. When it’s coming down to the wire, I really enjoy the competition. It helps me get rid of the nerves because I love it so much.

Finishing in third was Shane Devincenzo of Met PGA Golf Club who finished one stroke back at 146, carding a 72 in the final round’s tough and wet conditions.

“I definitely would say it was a grind. It wasn’t my best ball striking as much as I did shoot well. My putting was on, short game was on. I got up-and-down from pretty much wherever I was if I missed a green,” he said about his two rounds at the unfamiliar course.

The 17-year-old from Port Jefferson, played in a 36-hole U.S. Amateur qualifier during this championship’s practice round, and didn’t get into upstate New York until late at night, losing his chance to gain familiarity with the course. But the way he played this week instilled confidence in his game and competitive mindset going forward.

“I took a lot of mental positives away this week. Be confident in my game and my swing, and you don’t need to necessarily know the course to play well.”

Devincenzo made a 30-foot bomb for birdie to lock in his 72 and thought it might be enough. “I played consistent. I got beat, I didn’t really lose. I’m definitely pleased to take third.”

Bicks, of Skaneateles Country Club, ended up finishing tied for fourth at 147 along with Ryan Hart of Country Club of Buffalo and Gavin Simon of Locust Hill Country Club.

Sample now joins last year's champion, Jude Cummings of Irondequoit Country Club,, as well as Ron Philo, as the only two players in NYSGA history to win a Sub-Junior and then Junior title in back-to-back years. Moreover, they both won their Junior Amateurs in playoffs.

“There’s a lot of history to this event. It was great competition and I really enjoyed it. I’m just thankful and appreciative of everyone here that I was given this opportunity,” Sample said humbly.

In just a year, he transitioned from 6,000 yards to 6,850 yards on the tricky Robert Trent Jones design, but that didn’t seem to weaken his performance. “I can definitely handle it, I proved that to myself this week. It feels good, the confidence is huge. This will hopefully kick start a few good weeks coming up.”

Sample will be competing next in the U.S. Challenge Cup invitational at Liberty National. Afterwards, he’ll decide whether to take his exemption into the NYS Men’s Amateur in August at Irondequoit Country Club, or compete in the Northern Junior.

Whittaker too earned an exemption into the upcoming 9th New York State Men’s Amateur, in which he’ll accept. “it means a lot to me to go home with something this year. I’ve played in this championship for 4-5 years now. Last year, I came close and finished in fifth. To finish this year being right at the top was a good feeling.”