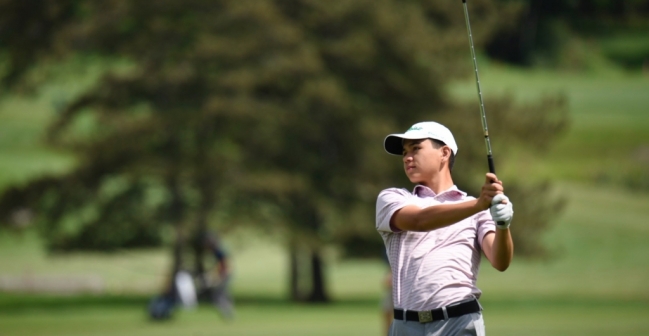 Related: Round 1 Results / Round 2 Pairings / Photos

Sample of MGA eClub – NYC started the round with two bogeys on his first three holes. The 2017 NYS Sub-Junior and 2018 NYS Junior Champ went on to convert four straight birdies, nine total, to finish Round 1 at six-under.

“I got off to a rough start but I’ve played this course enough times to know that I didn’t need to force anything. I didn’t need to try to make birdies, I knew there were birdies out there for me. I got into a bit of a hot streak after getting bogeys on two and three. I think I left a couple shots out there, but I am definitely happy with the way I played today.”

With the chance of winning three-straight NYS titles, Sample is just focused on his game: “Staying patient. I have the same game plan as today: just let the birdies come to me.”

Jud Langille of Trump National GC Westchester came in at four-under 68. The 17-year-old’s card consisted of six birdies and only one double-bogey, his first hole: “I got off to a really rough start making double on the first and then from there on out it was just fairway to green, and then make the putts.”

Langille has recently competed in multiple national competitions, including the U.S. Amateur Four-Ball earlier this year and the 2018 U.S. Junior Amateur. Speaking on how these experinces translate to his game today, Langille said, “Competing against the best kids in the country, there is no better way to prepare for an event like this. The better kids you play with, the more you are pushed so those tournaments have definitely helped me and I feel like I can get it done tomorrow.”

Joining Sample and Langille in the final group will be James Allen of Scarsdale Golf Club, who is competing in his first NYS Championship. Allen made the turn at one-over, but then went on to make two birdies and an eagle to finish at three-under to 69.

“I struggled a fair amount on the front nine. I made some putts to save myself, but I wasn’t really doing much. I just figured something out in my swing, and I hit a couple good shots. I had an eagle from the bunker on 12 which got me to three-under through 13 holes. From there, it was just about maintaining pars,” he explained.

In the opening round of the 63rd New York State Boys’ Sub-Junior Amateur Championship, Charlie Fischer of East Aurora Country Club carded a two-under 70 to take a one-stroke lead over the field.

Fischer converted five birdies, four on the front nine, in route to his two-under finish. He made the turn at three-under.

“Coming into today I just wanted to post a score. Shooting a three-under on the front gives you some comfort. Just keep the big numbers off the card, even if you have a couple bogeys, it is still alright,” he said.

Fisher, who finished runner-up at last year’s championship, spoke about the differences between this year and last year’s championship: “The big difference is the weather. Last year it was brutal to start but this year is perfect conditions. I knew scores were going to be low. The course has really held up from the rain and the greens are perfect.”

Jacob Dantonio of Crag Burn Golf Club posted a one-under 71 and will join Fischer in the final pairing along with Caleb Decker of Seven Oaks, who came in at 72.

Looking into tomorrow’s final round, Dantonio is excited to compete with New York’s best junior golfers.

“I knew I had a chance coming into this, but there are a lot of really good players. 71 is pretty good for my first round and I hope to do well tomorrow,” Dantonio said.

Decker is playing in his first NYS tournament, but he feels confident playing on his home course: “I feel really good because I know the course. You can’t always go with the flagstick, sometimes you have to play right or left. I feel really confident going into my round tomorrow.”

Five others broke 80 including Punn Chittaratlert of Tecumseh Golf Course at 74, Peter Gallucci of Wykagyl Country Club at 76, Matt Carpentier of Midvale Country Club at 77, Jason Starkweather of NYSGA eClub - Southern Tier and Sean Shallat of Salem Golf Club at 79.