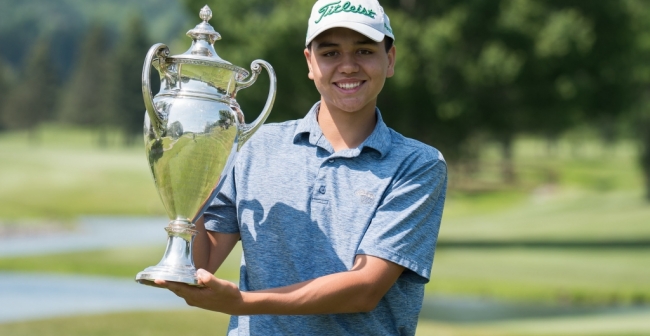 After thirty-six holes, Sample of MGA eClub – NYC and Jud Langille of Trump National GC were tied atop the leaderboard at three-under 141. Sample shot a 66 and 75, while Langille carded a 68 and 73 in the first two rounds.

The two players were paired in the final group together, along with James Allen of Scarsdale Golf Club who opened at 69.

Sample bogeyed the first two holes in the second round, allowing Langille to close the gap.

Both players spent time with the lead during the final round. Langille was one stroke up on Sample heading into the 18th hole. Langille bogeyed the home hole, while Sample finished with a par to force the playoff.

The leaders went back to 18, a 538-yard par 5, for the sudden-death playoff. Sample two-putted for birdie, while Langille made a par.

“Going into today, I felt pretty good. I will be the first to tell you that there were some big mental mistakes that I got away with. A win is a win and I am really proud with how I stuck with it on 18 and pulled driver. I decided I was going to go for the win,” Sample explained.

“This week was great. The last two days we have had perfect blue skies. I played well on the front nine today, but I had a rough back nine. But, congrats to Luke, he played great. Overall, I am happy with the week,” Langille said.

Speaking on the differences between this year and last year’s championship, Sample said, “Two completely different tournaments for the way I played them. I felt like last year I had consistency and could feel my rhythm. Yesterday, I had nine birdies and today only a couple, so completely different. But I am happy with both of them.”

Finishing in third was Allen and George Roessler of Maidstone Club, who carded an even 144. Roessler converted four birdies in the second round to finish at 69, the only under-par score of the day in the Boys’ division.

“Today I was more in control in the mental sense, and my putting helped,” Roessler said.

Both under 18, Sample and Langille will be eligible to compete at next year’s tournament.

“I would love to come back, it’s cool to try and win a state title,” Langille said.

The 14-year-old carded a 70 and 75 during the tournament to finish at 145. He converted seven birdies during the two-day tournament.

“This week was different for me. Usually it is my short game that holds me together, but this week it was my long game. My driver was unbelievable. I couldn’t believe how well I was hitting it. This is really the only tournament that I can say my driver won it for me,” Fischer said.

Speaking on the course conditions, Fischer explained, “It was a great final tournament round because of the way the course was set up. It wasn’t unfair, but you had to play smart. You don’t want to be aggressive and I think the champs Luke Sample and Bailey Shoemaker were able to figure that out,” he said of the course.

Punn Chittaratlert of Tecumseh Golf Course earned runner-up honors with a six-over 150. Chittaratelert is a veteran to this tournament and played his best game yet this year: “I was playing really well. I wasn’t in the lead group, which actually really helped me stay focused. I wasn’t distracted by the other players. This is my best year at this tournament.”

At 152, was Jacob Dantonio of Crag Burn Golf Club and Caleb Decker of Seven Oaks. The duo played in the final group with Fischer after carding a 71 and 72 in the opening round, respectively.

Rounding out the top five was Jason Starkweather of NYSGA eClub - Southern Tier at 158.